To honor veterans and military service, the Eastern Band of Cherokee Indians is looking into the possibility of counting military service time towards a tribal employee’s time when figuring retirement.  A resolution, submitted by Birdtown Rep. Travis Smith, to form a team to look into all aspects of the proposal was approved unanimously by Tribal Council during their regular session on Thursday, May 11.

The resolution forms a team consisting of members from the EBCI Veterans Service Office, EBCI Human Resources, Tribal Benefits Office, and EBCI Legal Office that is tasked with researching the idea and bringing a detailed, formal proposal back to Tribal Council during the August monthly session.

Rep. Smith said veterans should be honored, “What they did out there, that’s priceless for them to go out there and put their life on the line for us…giving them a few years of service, that’s nothing.”

He added, “For the amount of money that we spend on things around here, the little bit we could give to them to show the appreciation, I think that’s very meaningful.”

J.D. Arch, EBCI veterans service officer and U.S. Navy veteran, said he fully supports the idea and is looking forward to working with the team.  “It’s definitely a benefit to get this going, and I think it would honor our veterans… I support it, and I think it’ll be a good move to improve the relationship between our veteran’s community and the Eastern Band of Cherokee Indians.” 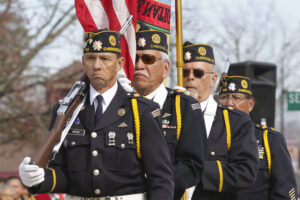 HONORING SERVICE: To honor veterans and military service, the Eastern Band of Cherokee Indians is looking into the possibility of counting military service time towards a tribal employee’s time when figuring retirement. (SCOTT MCKIE B.P./One Feather)

Cherokee County – Snowbird Rep. Adam Wachacha, a U.S. Army veteran, explained how the federal government works on the issue, “For instance, if you serve 20 years in the military, full active service, and when you get out the Postal Service, or some of the other federal entities will take that same 20 years, and you can transfer it into the Postal Service and then you’ve only got to work 10 years there.  Then, you’re fully vested at 30 years.”

He went on to say, “I think the proposal is looking at options like that for full vested military service.  We’re not saying we’re going to mirror what they do.  We may do something less.  I agree with Travis (Smith).  I think there’s more that we could do.  Men and women go and put their life on the line for our freedom, and what better way to pay them back?”

Currently, the EBCI Personnel Policy makes some concessions for military service such as Sec. 4.00 which states in part, “If two enrolled members of the Eastern Band of Cherokee Indians meet the minimum requirements and are of equal qualification, preference will be given to the enrolled member who is also an honorably discharged veteran.”