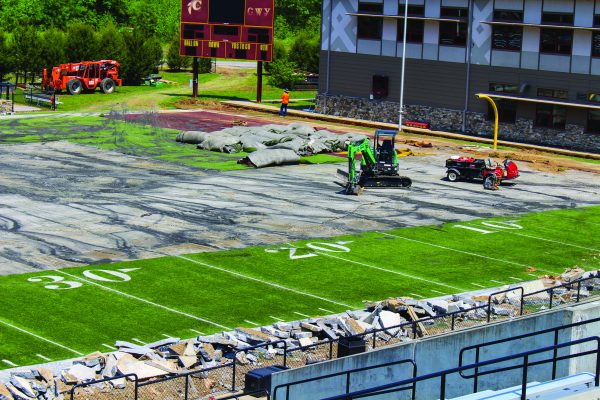 NEW TURF: Workers from Medallion Athletic Products of Mooresville (NC) work on removing the current turf at Ray Kinsland Stadium on Wednesday, May 10. Medallion has been slated to replace the turf, originally installed in 2009 by Field Turf. (SCOTT MCKIE B.P./One Feather photos)

Ray Kinsland Stadium at Cherokee Central Schools is getting a new look.  The turf on the field is currently being replaced due to degradation, and a lawsuit has been filed by the school system against the original installers.

“The synthetic turf installed by FieldTurf in 2009 has been steadily breaking up for the past several years,” said Dr. Scott Penland, Cherokee Central Schools superintendent.  “It has an eight year warranty.  We asked them to come in a couple of years ago and address our concerns.  They did come and make some corrections, but did not attempt to fix the fibers that were breaking up.”

He added, “I found out that several other schools were suing FieldTurf because they knowingly installed a ‘faulty’ product at that time.”

Dr. Penland contacted attorneys involved in a larger class-action lawsuit who visited Cherokee.  “Once they saw it, they agreed to add us to the ‘class action’ lawsuit at no cost to Cherokee.  If successful with the case, the attorneys will get a percentage of the amount we are awarded.  It is a win-win for us.”

The lawsuit complaint alleges, “This action involves the deceptive and unfair business practices of FieldTurf in connection with its manufacturing, marketing, sale, and installation of defective artificial turf sports fields installed in January of 2009 at Cherokee Central Schools.”

Patrick M. Wallace, a Raleigh-based attorney with Whitfield, Bryson, & Mason LLP, is working on the suit for the school system and stated, “As early as 2006, FieldTurf knew that athletic fields installed with its Duraspine artificial turf were showing signs of a defect that caused grass fibers to prematurely break down. As with many other schools, FieldTurf chose silence over customer service by not disclosing the defect. Cherokee High School’s Duraspine field failed in the exact way that FieldTurf knew it would fail. But, when Cherokee High School asked FieldTurf to fix the field, FieldTurf stonewalled them. We are proud to stand by Cherokee High School as it fights to vindicate its legal rights.” 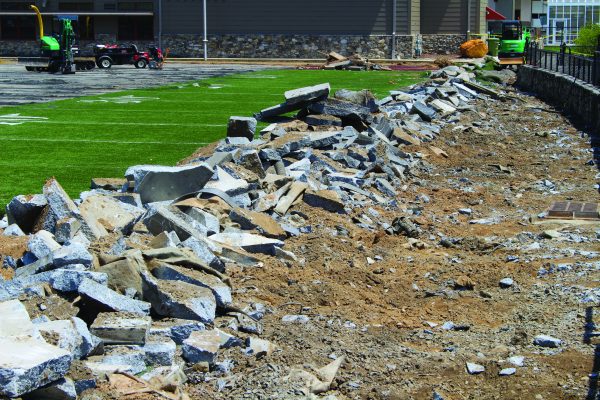 NO MORE HARD KNOCKS: In addition to changing the turf on the field, the concrete that extended onto the sidelines of the field is being removed for increased player safety.

Most of the complaints surround the FieldTurf fields, including the one in Cherokee, and deal with the company’s use of its Duraspine monofilament turf which it began to promote around 2005.

Complaints would come in soon after.

According to the suit, “FieldTurf knew that its representations about the durability and longevity of its Defective Product were false and likely to deceive its customers, including Plaintiff herein, based upon its knowledge of the Evolution fibers’ failures beginning as early as 2006.”

While the suit has been filed, the turf at Ray Kinsland Stadium could not wait for an outcome.  “We really had to proceed with a new turf, as it was getting dangerous in places that were worn down,” said Dr. Penland.  “Players did not have enough of the fibers to dig their feet into.  We were concerned about injuries.  We definitely want all athletes to have the very best playing field that is possible.”

While the field turf is being replaced, another safety issue is being addressed.  “Safety of our students is always our first concern,” Dr. Penland noted.  “The School Board has had many discussions about the concrete that was poured on both sidelines.  Players seemed to end up on this concrete.  We are taking advantage of this timing to put turf all the way to the walls on both sidelines.  This will make a much safer playing field for everyone.”

FieldTurf has issued a five-page document entitled “FieldTurf in the Media: Separating Fact from Fiction” in which it outlines its case against many of the claims against the company.  In that document, FieldTurf officials note, “The suggestion that FieldTurf ‘covered up’ or stonewalled’ customers around the Duraspine issue is simply not true.  In 2011, we sued our fiber supplier, publicly declaring what we believed the defect to be – inability to stand up to the sun – and stating which types of customers we expected to be impacted.”

The statement continued, “While we did not proactively reach out to every customer on the Duraspine issue, since it did not impact every customer, we have been proactive in dealing with the issue.”

The school is seeking at least $500,000 in the case but is leaving the exact amount open “because Plaintiff’s damages are continuous and progressive over time”.  They are seeking the Defendant to pay general and compensatory damages, punitive damages, costs of suit, and any further relief deemed appropriate by the court.

The original cost of the turf in 2009 was $636,000 according to the Cherokee Boys Club.  Last month, the Cherokee School Board approved $615,485 for the installation of the new field which goes to the lowest bidder, Medallion Athletic Products of Mooresville.