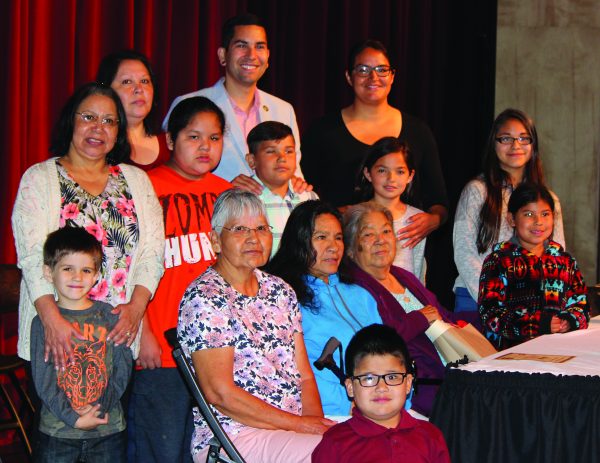 The 2017 “Honoring Our Grandparents” event was held at the Cherokee Central Schools (CCS) Joyce Dugan Cultural Arts Center (CAC) on Tuesday, April 18 and presented by the CCS Cultural Department.  Grandchildren wrote commentaries which were shared by Emcee Shawn Crowe.  The students listened intently to the life stories and happily took part as Robert Running Wolfe provided musical entertainment.  The event showcased the customary values of Cherokee Tradition and Culture.

Ruby Bark was escorted by her granddaughter, Roxie Bark.  Ruby is a fluent speaker of Cherokee and resides in the Wolftown Community.  She attended Cherokee Elementary and graduated from Sequoyah High School in Oklahoma in 1973.  She stated that English was her favorite subject and it was easy for her to read and write.  Ruby is a traditional basket maker and gathered her own roots, walnut bark, and vines.  She has impressed upon Roxie the importance of preserving Cherokee Arts.  Some of Ruby’s favorite memories were playing in the woods, throwing rocks, playing hide and seek, and tag.

Joseph Mitchell Owle Sr. was honored by his grandson, Josiah.  Joseph grew up on Old Number 4 Road in Birdtown.  He enjoyed playing outside a lot.  His early employment included a gas station, restaurant, and water treatment plant.  He is currently employed at the Oconaluftee Indian Village.  Josiah says that he enjoys Joseph telling him stories about his days as a Cherokee Braves football player.  Joseph enjoys carving pipe stems out of soapstone.

Rita Pheasant was escorted by her grandson Da-wo-ni Tv-di-sdi.  Rita resides in the Big Cove Community.  She attended the Cherokee and Robbinsville schools and later earned her GED.  Her happiest times were being around elders who were speaking Cherokee.  Rita would ask and they would tell her what they said.  Da-wo-ni says that his Grandmother teaches them Cherokee and then the kids speak with each other.  He has learned about making frybread, chili, bean bread, and deer meat.  Rita’s wish is for her grandchildren to learn the Cherokee Language, stay in school, don’t do drugs, and stay out of trouble.

Leonard Long was honored by his granddaughter Joscelyn Stamper.  Leonard is from the Painttown Community.  Joscelyn enjoys the fact that her Grandfather is funny and takes her fishing.  They clean and cook the fish they catch.  Joscelyn says Leonard tells her BIG stories all the time and she doesn’t know “if he is lying or telling the truth,” but they are good stories!  They hunt for crawfish, mushrooms, ramps, and greens.  Most of all, Leonard loves her and she loves him.

Pam Cucumber was escorted by her grandson, Jayce Toineeta and is from the Wolftown Community.  Pam attended the Cherokee schools and Riverside Indian School in Oklahoma.  She furthered her education at Montreat College and received her degree in business.  Her happiest moments include the birth of her grandchildren.  She and Jayce enjoy picking sochan, poke salad, and black berries.  Pam continues to teach him about his clan and native foods.

Eva Reed was escorted by her grandson, Kealan Jumper.  Eva resides on Blue Wing Church Road and is 72 years young.  Kealan says his Grandmother used to go to Soco Day School but she doesn’t go any more.  She is too old!  They enjoy swinging together, walking to the garden, and eating at Clyde’s Diner in Waynesville.  Kaelan is happiest when his Grandmother reads to him.