(Note: This article is reprinted here with permission.)

Nevada lawmakers are set to consider a bill to allow for pari-mutuel wagering on e-sports and poker tournaments, in the latest in a series of legislative proposals drafted by students at the William S. Boyd School of Law in Las Vegas.

“The main reason for our bill is that it’s very hard to set lines for events such as e-sports and the WSOP [World Series of Poker],” said Kathleen Gallagher, a second-year student at the University of Nevada Las Vegas (UNLV) law school.

The bill now pending before Nevada Senate members defines “other event” as any event other than a horse race, dog race or sporting event.

If eventually signed by Nevada Governor Brian Sandoval, the changes would come into effect on July 1. “We are clarifying the law,” said Mark Starr, a third-year student at Boyd Law School. “We are submitting a definition to use to approve these events.”

So far, Nevada gaming regulators have only approved the use of pari-mutuel wagering beyond horseracing for daily fantasy sports.

USFantasy Sports launched in August with an initial rollout in about 40 casinos in Nevada. Nevada has two separate license categories regarding race and sports wagering. 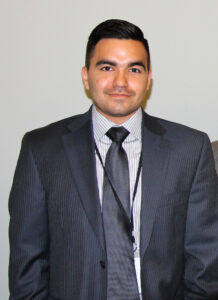 GAMING: P. Nelson Lambert, an EBCI tribal member shown in this photo from 2014, is one of several students at the William S. Boyd School of Law in Las Vegas involved in drafting legislation being considered by Nevada lawmakers that would allow for pari-mutuel wagering on e-sports and poker Tournaments. (SCOTT MCKIE B.P./One Feather)

A “race book” is defined by statute NRS 463 as the business of accepting wagers upon the outcome of any event held at a track which uses the pari-mutuel system.

Meanwhile, NRS 464 defines a “sports pool” as the business of accepting wagers on sporting events or other events by any system or method of wagering.

SB 240 would change both statutes to allow for “other event” pari-mutuel wagering. The five-page bill has been referred to the Senate Committee on Judiciary.

“Gaming is the life blood of our city,” said Starr. “We are adapting the regulations to make [pari-mutuel wagering] on other events possible.”

Proposed changes to Nevada’s gaming statutes have been drafted by law students at UNLV for consideration during each of the state’s legislative sessions since 2001.

“We are pretty lucky we fall on this term. The legislature only meets every other year for 120 days,” said Nelson Lambert, an EBCI tribal member who enrolled at Boyd to earn his LL.M. degree in gaming law.

The legislative projects were overseen in the past by attorneys Bob Faiss and Greg Gemignani of nowdefunct Nevada law firm Lionel Sawyer and Collins.

Student bills in prior sessions have dealt with issues such as the rights of winners of progressive jackpots and the ability of Nevada officials to appoint interim members to the state’s Gaming Control Board.

In 2011, Nevada lawmakers approved Boyd Law School-backed legislation allowing companies or individuals to apply for a so-called “preliminary finding of suitability” from Nevada gaming regulators. Under the law, applicants are now able to undergo background investigation to establish that they would qualify for a Nevada gaming license without actually establishing a business operation that triggers a licensing requirement.

Prior to the 2011 legal change, to apply for a Nevada gaming license or a formal finding of suitability, applicants already had to be doing business with a Nevada casino or have an agreement with one.  The previous law, on the books since the 1980s, allowed busy state regulators to focus on license applications that seemed more financially viable.

Since 2011, however, the “preliminary finding of suitability” concept has been used by the likes of Malaysian casino giant Genting and Ireland’s Paddy Power, among others.

“It’s our life blood,” Lambert said of casino gaming.  Once the year is over, Lambert told GamblingCompliance he plans to work as a gaming attorney “for the betterment of our Tribe.”

“I wanted to learn about the future. What better place to do that than in Las Vegas,” Lambert said. “It has given me a really strong regulatory experience to take home with me.”

Starr, the third-year law student, agreed, saying “it’s about getting our feet wet” when it comes to writing new gaming regulations.