Cherokee Language in danger, but “there is hope”

On a regular Wednesday morning, EBCI tribal member Micah Swimmer takes a marker and crosses out a name on a white board in the lobby of the New Kituwah Academy.  Swimmer, early childhood supervisor at the school, worked hard to compile a comprehensive list of fluent Cherokee language speakers among the Eastern Band of Cherokee Indians.  On this day, he has the hard job of removing a name from the list due to a recent death.

“I’ll pick somebody different from here (New Kituwah Academy) to mark off a name,” he said.  “So, it hits their heart…it wakes people up.  We have to hurry up.  We don’t have much time left.”

According to National Geographic, of the over 7,000 languages currently spoken on planet Earth, over one-half of those will be extinct by the year 2100.  The Linguistic Society of America states that only 194 American Indian languages remain with only 33 of those being spoken frequently by both adults and children alike.  They state that 49 of the 194 are spoken by only a few people, mostly over the age of 70.

The white board at New Kituwah Academy lists around 240 names. 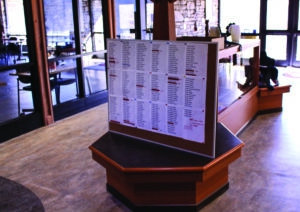 EYE-OPENING: A white board containing names of all of the known fluent Cherokee language speakers of the Eastern Band of Cherokee Indians sits in the lobby of the New Kituwah Academy as a reminder of the importance of maintaining the language. (SCOTT MCKIE B.P./One Feather)

Mary Brown, a first language Cherokee speaker and EBCI tribal elder from the Snowbird Community, said, “Ten years ago, there were about 2,000 speakers.”

She noted, “Speaking our native language on a daily basis is key in utilizing our language and in assuring its livelihood.  We can continue as we expand and encourage involving families and extended families within our communities in being actively involved.”

Brown praised the Tribe’s efforts with the New Kituwah Academy, a language immersion school that opened in 2004 and moved into its current facility in 2009.  “With much appreciation to the Eastern Band of Cherokee Indians, the Academy offers an opportunity for infants and youth up to the sixth grade to learn our native language and to keep it alive.”  She said the Tribe has also funded language classes at several area high schools.

Bo Lossiah, New Kituwah curriculum and instruction supervisor, put the language into perspective.  “The English language that we’re speaking right now is only 1,500 years old…lowballing.  Cherokee language and how we speak it now is over 3,000 years old.  So, it’s twice as old as what’s known as English.”

He stressed the importance of listening to the fluent speakers.  “It’s like smoke.  You see it for just that second and then it’s gone forever.  That’s how it is.  That’s how the language is.  When they’re sitting there speaking Cherokee, if there’s not a recorder there, there needs to be because they might bring up an old word that no one has used in a long time.  And, it’s there for a second and then it’s gone.”

Swimmer and Lossiah both advocate declaring a State of Emergency for the Tribe when it comes to the state of the language.  “Everyone’s expecting these fluent speakers to teach these babies, but there’s no one in the middle so when these guys go on to the next world, who’s next in line?  We are, and if you don’t have enough fluent speakers, it’ll only be bits and pieces, words and phrases – that’s it.” 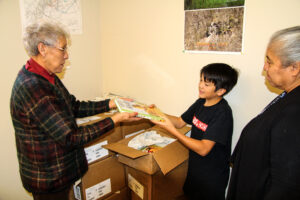 NEW CHAPTER: Myrtle Driver (left), EBCI Beloved Woman, hands a copy of “Charlotte’s Web” which she translated into the Cherokee language to her grandson, Taliquo Walker, on Wednesday, Jan. 6, 2016 as Painttown Rep. Marie Junaluska, herself a fluent Cherokee language speaker, watches. Driver translated the book over a three-year span.

Lossiah said a recent adult immersion program at the Academy is going well.  “The pilot group that we have now is doing well, but they also work here.  They’re doing well.  I’ve heard quite a bit of improvement.”

One group that is actively working to preserve the language for posterity as well as keep it a vibrant, living entity is the Cherokee Language Consortium which is comprised of first language speakers from the three Cherokee tribes.

Brown explained, “The group is comprised of the eastern and western Cherokee tribes who develop contemporary vocabulary words that are in use by the Kituwah Academy and Sequoyah Immersion Schools in Oklahoma as well as in the communities.”

She said language classes are being held throughout Cherokee communities in North Carolina and Oklahoma.  “We need to continue to do our best to keep our language alive and to promote our communities to do the same so our children can thrive, maintain the memories and perpetuate the same to continue the link to their future.”

The project itself came out of a need.  New Kituwah Academy students are learning to read in the Cherokee language, and as their reading levels increase, they need books to read and there aren’t many.  The school needed chapter books.

So, Driver got to work and three years later, on Jan. 6, 2016, a box of 201 books were opened at New Kituwah containing the translated works.  Driver told the One Feather that day, “I tried to put as much Cherokee into it, not only just the language, but how the animals respected each other, how they spoke, and they spoke properly.  Not only will they immerse themselves, like I did, into the story, but they’ll learn how to treat each other and how to treat mankind.”

Brown is optimistic of the future of the language, “As long as , we as educators and community members, encourage and promote the significance of learning and keeping our language primary, with continuity at the forefront, we can help to continue lifting the support and in continuing the momentum to learning and preserving.”

Swimmer admonished all tribal members, “If everyone will learn just a word a day and begin working on phrases, then there is hope.”

To view the Cherokee Language Engine database with over 7,000 entries to date, visit: https://siyo.brokentrap.com/.