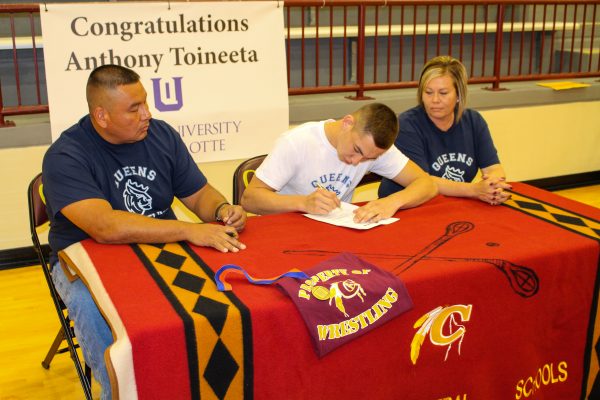 WRESTLING: With his parents Bruce and Sunshine Toineeta looking on, Anthony Toineeta signs a letter of intent in the Charles George Memorial Arena on Monday, May 1 to wrestle next season for Queens University of Charlotte. (SCOTT MCKIE B.P./One Feather photos)

Anthony Toineeta, the most decorated wrestler in Cherokee High School history, is going to the next level.  He signed a letter of intent on Monday, May 1 in the Charles George Memorial Arena to wrestle next year for Queens University of Charlotte.

Toineeta, who will join the Royals inaugural team, commented, “It’s exciting.  It’s what I’ve worked for my whole life.”

Queens University announced in March that it was adding men’s wrestling to its athletic program.  Ken Chertow, a six-time U.S.A. National Team member who competed in the 1988 Summer Olympics in Seoul, South Korea, was selected as the program’s first head coach.

He plans to study exercise science at Queens.

Tavi Rivera, Braves head wrestling coach, commented, “I couldn’t be more proud of this kid.  He’s everything a coach would want.  He works hard.  He puts in extra work before practice and after practice.  He loves the sports, and he enjoys it.”

Bruce Toineeta, Anthony’s father, said of his son’s signing, “It’s an honor.  We did a lot of work, did a lot of traveling.  It’s a pay-off for this to happen.  My daughter signed a couple of years ago.  She got a scholarship.  It’s just an honor for my kids to be special enough to go to the next level.”

Sunshine Toineeta, Anthony’s mother, related, “He’s been wrestling since he was little.  He dreamed of becoming a state champion and he reached that goal twice.  Now, he’s working hard to excel at the next level.  I’m very proud.”

Queens University is a NCAA Division II program and will compete in the East College Athletic Conference. 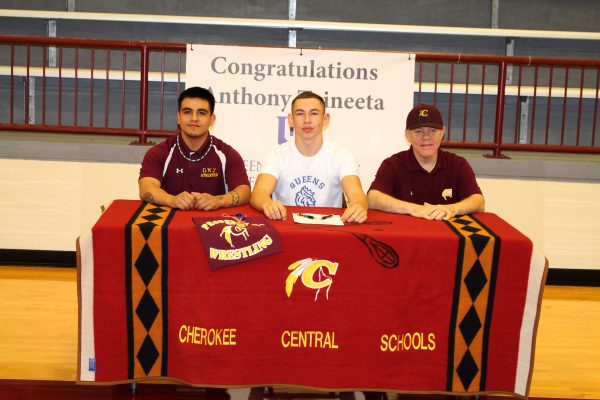