Two locals have been honored by the Rocky Mountain Elk Foundation (RMEF), an elk and wildlife conservation group that is based in Missoula, Mont. and has over 500 chapters nationwide.

“I’m a lifetime member of the Rocky Mountain Elk Foundation,” said McCoy.  “I feel that it’s my responsibility to do all I can to make sure that these elk survive and do well in our mountains, so they will be here forever.” 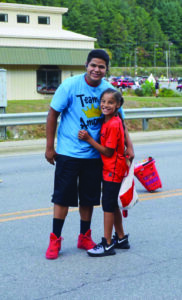 COMMUNITY-MINDED: Connor McCoy (left), shown handing out candy at the Cherokee Indian Fair parade, is a recipient of a Youth Volunteer Award from the Rocky Mountain Elk Foundation. (Photos contributed)

McCoy, a freshman at Swain County High School, lives with his family in the Birdtown Community.  He was nominated for the award by Cooper who related, “While Connor is eager to participate in outdoor activities, this eagerness is tempered with a great respect for nature.  He grew up watching the elk population expand in his hometown and always took pleasure in elk watching from a young age.”

“It was such a great honor to receive this award from such a wonderful organization at the RMEF National Convention in Nashville,” Cooper noted of receiving the Chairman’s Award.  “To be recognized by your peers and to see the elk roaming our beautiful mountains makes all the hundreds of volunteer hours worthwhile!”

Chris Croy, RMEF regional director, said of Cooper, “She’s a breed that talks the talk, walks the walk and challenges everybody along the way to join her.” 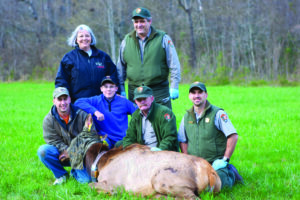 Cooper has been a member of the Great Smoky Mountains Chapter since 2001 and served as North Carolina state chairperson from 2011-16.  According to her nomination form, some of the projects she’s been involved with over the years include: helping raise the $1.1 million to fund the reintroduction efforts of elk into the Great Smoky Mountains National Park, volunteering with Park biologists to help replace tracking collars and ear tags and record health statistics on elk, setting up displays and making presentations at numerous area and regional events including the annual Children’s Talking Trees Trout Derby in Cherokee, and working to successfully initiate the sale of North Carolina Elk license plates.

Gale Dills, who nominated Cooper for the award, commented to Bugle Magazine, the publication of the RMEF, “I don’t see how Joyce does all she does!”

For more information on the RMEF, visit: https://www.rmef.org/.