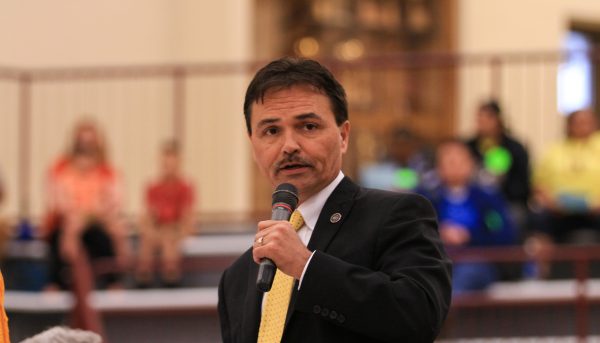 HISTORIC: Principal Chief Patrick Lambert speaks at the beginning of a Grand Council meeting held on Tuesday, April 18 at the Charles George Memorial Arena. It was the first such meeting held for the Eastern Band of Cherokee Indians since 1995. (SCOTT MCKIE B.P./One Feather photos)

For the first time in over two decades, a Grand Council meeting of the Eastern Band of Cherokee Indians was called.  Principal Chief Patrick Lambert called and chaired the meeting held on Tuesday, April 18 at the Charles George Memorial Arena.  Two measures passed during the over six-hour long meeting included ones that would halt the impeachment proceedings brought against Chief Lambert by members of the Tribal Council.

In all, five measures, on various topics, were passed during the meeting.  Four of those measures were balloted items and one was brought to the floor during the meeting.  Only EBCI tribal members 18 years old or older were allowed to vote, and the counting of the ballots was overseen by Clifford Owl Jr., an EBCI tribal member from the Cherokee Co. community who serves as a tribal magistrate.

Immediately following the announcement of the ballot counts, Chief Lambert stated, “I think it’s a good day for the Cherokee people.  Don’t let them tell you your votes don’t count.”

It was reported during the meeting that a total of 1,355 eligible voting people were in attendance.

Several EBCI tribal elders spoke at the beginning of the meeting including Nannie Taylor, Wolftown Community, who said, “Respect is helping each other, loving each other…this has gone way too far.”

Amanda Swimmer, an EBCI elder from the Big Cove Community, spoke of unity among the members of the Tribe and said, “I love everybody, and I try to help everyone as much as I can.  We love this man (Chief Lambert), and I want to keep him.”

During his opening remarks, Chief Lambert called it “an historic event” and commented, “We’ve only had one of these called twice in my entire lifetime…”

He added, “As Principal Chief and in considering recent events and issues that have come to tribal government in what has been termed by our tribal court as a ‘state of crisis’, I’ve called this Grand Council to settle issues and give closure to everyone so we can move forward as a nation.”

Chief Lambert cited Section 10 of the Tribe’s Charter and Governing Document which gives him the right to call such a meeting.  It states, ““The Principal Chief shall have the right to call a Grand Council of all enrolled members to attend and he shall preside over such meeting.”

He said it is imperative for the Tribe to move forward on issues such as solving the drug epidemic, solving housing issues, working on economic development, and finalizing the newly established Tribal Agriculture Department.  “There’s so many serious issues facing our Tribe, and we should be working on them instead of fighting…I hear your voices, and I will honor Grand Council.  Merely because it’s seldom used in our history does not mean it’s invalid.”

The last Grand Council meeting of the Eastern Band of Cherokee Indians was held in early October 1995 following the inauguration of Joyce Dugan as the Tribe’s first female Principal Chief.  “It is time that the government is given back to the people,” Chief Dugan was quoted as saying in an Associated Press article published Oct. 3, 1995.

During Tuesday’s meeting, the issues were discussed, and tribal members were each given three-minutes at a time to express their views.

First up was the “Power to the People” resolution which was previously tabled by Tribal Council during its regular Budget Council session on Tuesday, April 4.  It passed with overwhelming support on Tuesday.

The voluntary program will cover the energy costs for those EBCI tribal members who have reached the age of 59 ½ and reside within the five-county service area including: Jackson, Swain, Graham, Haywood, or Cherokee counties.  The program itself will be administered through the EBCI Public Health and Human Services division.

Judith Smith, an EBCI tribal elder from the Birdtown Community, said many elders are on a fixed income, “This resolution would help a lot of Indian families.” 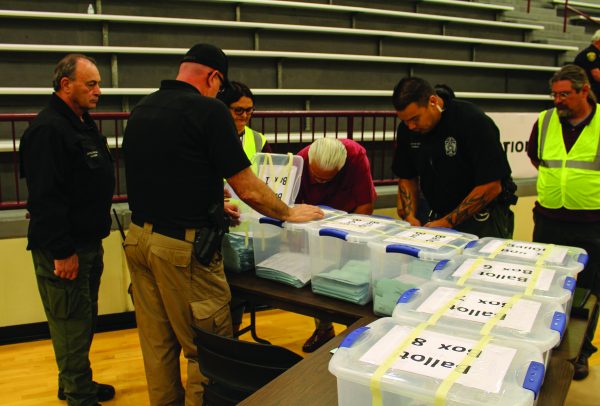 BALLOTS: At the end of Tuesday’s meeting, ballot boxes were collected and counted under the security of the Cherokee Indian Police Department. Clifford Owl Jr. (maroon shirt center), an EBCI tribal member from the Cherokee Co. Community and tribal magistrate, served as ballot proctor for the event and is shown checking a vote tally.

The two impeachment resolutions were discussed together.  The first one resolved to “kill the intent and direction of Res. No. 502” and directs that “the Articles of Impeachment regarding Principal Chief Patrick H. Lambert are hereby declared invalid”.  The second resolution resolved to kill Res. No. 546 which approved Articles of Impeachment against Chief Lambert and set a date for the start of the impeachment hearing.  Numerous people spoke on those measures as well as the state of the Tribe in general.

“Chief Lambert, we put you in to do a job, and you have far surpassed what we asked you to do,” said Janelle Rattler, Snowbird Community, who also noted, “At least we have a Chief who has followed through in what he said he was going to do for us.”

He went on to say, “Everybody wants to talk about rules and regulations, how about those old ways?  Everybody talks about going to church, how about a stomp ground?”

Joey Owle, Wolfetown Community, questioned certain aspects of the Grand Council meeting.  “Only certain people were allowed to submit resolutions.  Why wasn’t the general audience allowed to do so?  To reiterate, this Grand Council is about the Chief (Lambert).  This is about his agenda.”

Converting the old Cherokee High School site, aka the Acquoni Expo Center, into the Maggie Wachacha Tribal Headquarters was also approved during the meeting.  “All of the services within the Tribe would be able to be relocated there,” said Chief Lambert.

Glenn Bradley, EBCI Tribal Construction program manager, spoke about the current condition of the building.  “All floors are sound.  There are no stress fractures.  The structure is in great shape.”

Discussion on that issue led into discussion on the location of the New Kituwah Academy expansion as previous legislation was passed whereby the Academy and the Cherokee Youth Center would inhabit the old high school site.

After the resolution approving the Maggie Wachacha Tribal Headquarters was passed, a floor measure was entertained that stated the expansion of the New Kituwah Academy would occur in phases and include a gymnasium, space for a Speaker’s Bureau, and upgrading space for the addition of middle school classes.  The New Kituwah expansion measure was not a balloted item, and a floor hand vote was held with no visible nays being counted.

At the end of the meeting, Chief Lambert commented, “The important thing is I want to honor the wishes of the people of this Tribe…the people have spoken today.”