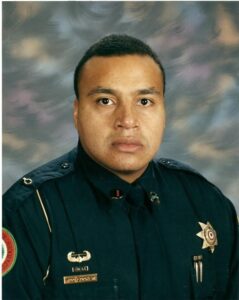 Rodreques “Rod” Charles Cooper, 44, of Cherokee, passed away Monday, March 27, 2017 at Mission Hospital surrounded by family after an eight-and-a-half-year battle with ALS. Rod was preceded in death by his mother, Ann Lossiah Cooper of Cherokee. He is survived by his wife, Cristin Murphy Cooper and four children, Ashford Smith, Lisa Cooper, Gregory Cooper, and Zachary Cooper.

Rod was a 1990 graduate of Cherokee High School and served in the U.S. Army during the Gulf War. After serving his country, he returned home and joined the Cherokee Indian Police Department. Throughout his career with CIPD, he served as a school resource officer, was a member of the SWAT team, and championed the Cherokee Central School’s DARE program. His hard work and dedication were recognized through his advancements as Sergeant and Lieutenant in the department’s Juvenile Division. Most importantly, Rod was a loving father and husband.

Visitation for family and friends will be held Friday, March 31 from 6-8pm and funeral services on Saturday, April 1 at 2pm. Both will take place in the Chief Joyce Dugan Cultural Arts Center at Cherokee Central Schools.