There will be at least three new faces around the horseshoe following this fall’s Tribal Council election.  Vice Chairman Brandon Jones, Big Cove Rep. Teresa McCoy, and Yellowhill Rep. B. Ensley have all decided not to seek re-election. 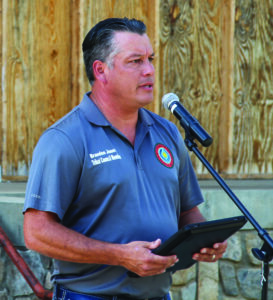 “Moving on from Tribal Council was not a decision I took lightly, and it’s a decision I have prayed about earnestly since before the last election in 2015,” said Vice Chairman Jones who is in his second term representing the Cherokee County – Snowbird communities.  “I feel like God allowed me to be a productive member of Tribal Council and to Him goes all the Glory! God has opened the door to many homes for me, and, in the process, I have made many, many great friends whom I will always cherish.”

He said he moves onto the next part of his journey with peace of mind.  “I promised myself I would not stay in politics long enough to become a ‘politician’. The stress and demands of the job have taken their toll on me physically, and I commend anyone who has ever served. I’m not sure what God will use me for next, but on the last day to file again for reelection I woke up with a peace about me and I knew it was time. I’m excited about the future, and I will always remain close to the EBCI and my friends in the communities.” 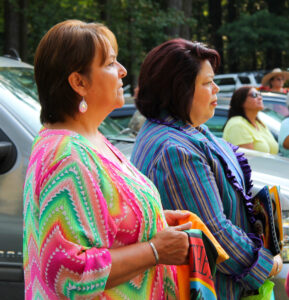 PRIDE: Big Cove Rep. Teresa McCoy (left), shown with EBCI Secretary of State Terri Henry, holds the flag of the Eastern Band of Cherokee Indians prior to it being hoisted at the Tri-Council Meeting at Red Clay State Park in Tennessee on Friday, Aug. 28, 2015.

Rep. McCoy, the first female to represent the Big Cove Community, commented, “The reason I chose to not file came during the last election. I finally feel comfortable that this administration will place the need of our members before their own.  Maybe I just needed to help during the transition and with the exception of the current issue of the FBI, and the impeachment nonsense, I feel that my services are not needed anymore.”

She added, “Tribal Council should never be a career.  It should always be an honor of service. Big Cove has wonderful people, educated, with fresh ideas and healthy minds and bodies who are ready to step up and bring their knowledge and philosophies to the table. I trust them, I believe in them. My community is part of my soul and my spirit.  I love Big Cove, and I appreciate each wonderful member in it.”

Rep. Ensley commented, “First and foremost, I would like to thank the Yellowhill voters for allowing me to serve and represent them for 11 terms.  I ran for Tribal Council because I wanted to make the Tribe more successful and offer more for our people.”

A staple at community and local sporting events, he noted, “I have decided to leave office and not seek a twelfth term because I want to spend more time with my family, and there are other things I want to do…like go fishing.”

Vice Chairman Jones said it was an “honor and pleasure” to serve on Tribal Council, and he was happy to see some of the goals he set for his community and the Tribe, as a whole, come to fruition.

“First, I wanted to see a Drug and Alcohol treatment center come to life,” he noted.  “It was such a long overdue necessity in our community and so many people had been advocating for it and so many lives on the Boundary, and in our neighboring communities, have been destroyed by addiction. I was personally addicted to drugs for seven and a half years, and the treatment center was the number one priority on my list of goals. I’ve lost many friends and family members to addiction. I’m thankful to have been a small part of seeing it come to life. So many Councils and Chiefs before me and so many parents and people in recovery have been pushing for this for so long. Casey Cooper and the wonderful people at CIHA (Cherokee Indian Hospital Authority) also were instrumental in moving this forward. As you know, it’s being built close to my home in Snowbird, and I can hear the equipment operating from sun up till sun down every day, and it gives me great joy knowing it may help to change and even save someone’s life in the future.” 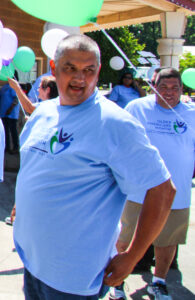 SUPPORT: With his ever-present smile, Yellowhill Rep. B. Ensley (foreground), with Chairman Bill Taylor in the background, is shown at the end of the Elder’s Walk on May 24, 2016.

Another goal he was able to see come to fruition is the construction of a new child care facility in the Snowbird Community.  “My brother and I both sent our kids through this facility. It was so long overdue and thankfully Tribal Council agreed to fund and build new child care facilities in both the Big Cove and Snowbird communities.  I drive by the new site often to see the new center being built. I’m happy for both of these communities and the children they will serve.”

A new Snowbird Senior Citizens Center officially opened on Monday, March 27, and Vice Chairman Jones noted he is very proud of his part in that project.  “I grew up on the adjacent property and to see the new structure going up for the seniors fills my heart with joy. I want to thank Debbie West and her staff and Council members Adam Wachacha and the late Diamond Brown who also shared the same goals and were critical in moving this project forward. They all had the ball rolling before I came on board. Debbie and I used to discuss this project when I worked with her at Tsali Manor. She had a vision and it’s coming to life… it will be used on a daily basis.”

Internet access is another issue he hopes will be looked at soon.  “Connectivity to fiber and better cell phone coverage are both things I complain about on a regular basis where I live,” Vice Chairman Jones noted.  “It’s almost impossible to get a call out or to get things to stream online when the kids are doing homework, but thanks to everyone involved we are in the process of getting both of these needs fixed in the next year. What a blessing that will be.”

There were several more projects Vice Chairman Jones had hoped to get accomplished, but didn’t during his term.  But, he says that won’t stop him from working on them.  “Overall, I’m happy with what we’ve been able to accomplish in such a short time, but one project I’ve not been able to make any headway on is an assisted living center for Cherokee County. This is one project that is definitely justifiable with the aging community and the age of their caregivers in that community. Demographically, we have more seniors and senior caregivers concentrated in that community than anywhere else. We need one in Cherokee as well.  I won’t quit working on it even after I leave Tribal Council. This is my biggest regret not being able to get that project moving like it should.”

Rep. McCoy submitted more than 150 pieces of legislation during her time on Tribal Council, and she is proud of some of the accomplishments of the Tribe she had a hand in including the gas tax agreement with the state, the privilege tax, the acquisition of the Ravensford property for the new Cherokee Central Schools, and more.  Of her legislation, she noted, “Most passed, some were withdrawn, some were killed, but that is probably more than any Council member has ever submitted.  I truly believe I accomplished more than I ever dreamed I could.”

Like Vice Chairman Jones, Rep. McCoy has some things she’d either like to see accomplished during the remainder of her term or later.  “Some issues I hope to be part of are term limits for Council Members and an answer to resolve the illegal drug issue on our Boundary. I will never stop looking for a way to help that situation. I also want to see the agricultural department developed, and more diversification in economic development. I stand behind the Data Center, and I still believe that regardless of who we go with, let’s go! These are worthwhile projects, and I hope Council and the Chief (Lambert) will continue to make it happen. Water parks and hotel expansion are old and stale. Outlet malls would be nice.”

Of his time in Council, Rep. Ensley noted, “I believe one of the most important things our Tribe has done is to put safeguards in place for our money, but to also create the Endowment Funds to provide for our future.  I am most proud that those financial management policies put the EBCI in a position to build the new school.”

He added, “We, tribal leadership, worked for years to secure a site for the school, to save money to build it, and to see the project through to completion.  The lasting effects of the new school on our Tribe can never be measured.  We also began recognizing achievements of our students and providing funding for higher education.”

Providing these opportunities was always on his mind while in office.  “I wanted to give our youth opportunities for recreation and education, and the Tribe has made tremendous achievements in both of those areas.  Our children are the future of this Tribe.  We built community recreation centers, the Skate Park, John Crowe Recreation Complex, and the golf course.  Included in those recreation centers, Yellowhill was able to receive the new Events Centers.  All these projects work hand-in-hand to make our Tribe more successful by providing opportunities for our children.”

But, two particular purchases really make him proud.  “The purchase of the Kituwah and Cowee Mounds were some of our proudest moments.  Our Tribe has been able to reclaim our lands, and that is an accomplishment many tribes believe is of utmost importance.”

There are several areas he wished there had been more progress.  “I leave office disappointed that we have not been able to complete more economic development initiatives such as restaurants, retail shopping, etc. – all of which would benefit our people.  We have undertaken consideration of several projects which have not been built.  Our people need an updated dialysis center and long-term care center.”

Vice Chairman Jones said he’ll still be around, just not in Council, “Just because I’m not sitting around that horseshoe doesn’t mean I won’t be available to anyone who might need me. However, I plan to do a little more fishing next spring with my three young kids, and I promised them I would be more present mentally and physically so you might have to leave me a voicemail.”

Rep. McCoy has spent several decades researching tribal laws and ways to make the Eastern Band of Cherokee Indians better.  Now, she is going to channel her love of research into a formal education.  “I look forward to eventually getting my degree in something I want now. I am the only one in my family who isn’t educated. Johnny and my sons have theirs. I want a degree too. Travel is coming to my life, focusing on my family, healing up from some much needed surgeries, and living a small, clean, healthy farm life is what the rest of my life will be. I want to help feed our members at the soup kitchen, and continue to volunteer if I can.”

As his term of service winds down, Rep. Ensley is planning for family time, “I plan to enjoy my family, do a lot of fishing, and watch my kids play sports.”