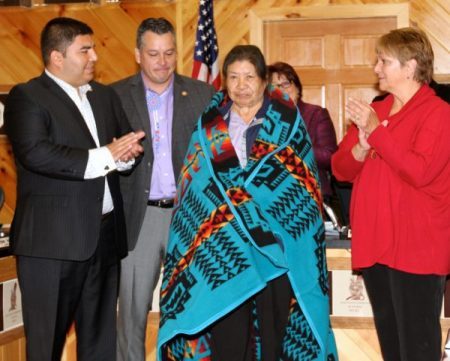 “These honorary degrees recognize leaders in their fields, not only for their professional and personal work, but for their deep commitment to our campus, our community and our country,” said UNC Asheville Chancellor Mary K. Grant, who will preside over the ceremony, which starts at 9am on the University Quad. “Each one has had a profound impact, on science, medicine, arts and culture. We are grateful for their work and the experiences that they can share with our students, particularly as our graduates embark on their careers and make their way in the world.”

Pat Smith, UNC Asheville Board of Trustees, commented, “Each spring, our campus community comes together to celebrate our graduates – the next generation of leaders in our state and nation – as well as honor inspiring individuals who exemplify our liberal arts values across the arts and sciences and throughout their work and lives. It’s a day we look forward to and welcome friends and families to be a part of.”

Ellen Wachacha Bird is an elder of the Eastern Band of Cherokee Indians and was bestowed the title of Beloved Woman in November 2013.

Born and raised in the Snowbird community, she is the daughter of Rily Wachacha and Ancy Walkingstick. A fluent Cherokee speaker, she has shared her knowledge of Cherokee traditions, including medicines, quilting and food, not only with her 10 children, but also with the community. As a Beloved Woman, she is recognized as someone the community can call a sister, a mom or a grandmother, and she is well-known among children for teaching a quilting class in the Summer Arts Camp as part of the Graham County Indian Education Program.

Bird was honored as a matriarch at the 100th anniversary of the Cherokee Indian Fair. She was also recognized as a Distinguished Citizen on Ned Long Day in November 2006.

Bird will receive an honorary Doctor of Humane Letters degree.

Barrett, who currently serves as the deputy assistant administrator for research at the National Oceanic and Atmospheric Administration (NOAA), supervises the daily operations and administration of NOAA’s research enterprise, and the execution of NOAA programs including the Climate Program Office, Ocean Acidification Program, the National Sea Grant College Program, Ocean Exploration and Research, and the Office of Weather and Air Quality research.

She will receive an honorary Doctor of Science degree.

Dr. Olson Huff, a Kentucky native, has practiced pediatrics in North Carolina all of his professional career, first in Charlotte, and since 1982, in Asheville, where in 1987 he established the child development program, subsequently named in his honor, at Thoms Hospital.

He will receive an honorary Doctor of Science degree.

Lamar is a prolific wood turner who produces his work in Saluda and has contributed exceptional skill and vision to the world of woodturning for more than 25 years. His sculpture is created primarily through a unique approach to multi-axial lathe work, which gives his pieces a distinct sense of line and movement unlike other works of turned wood.

He will receive an honorary Doctor of Fine Arts degree.