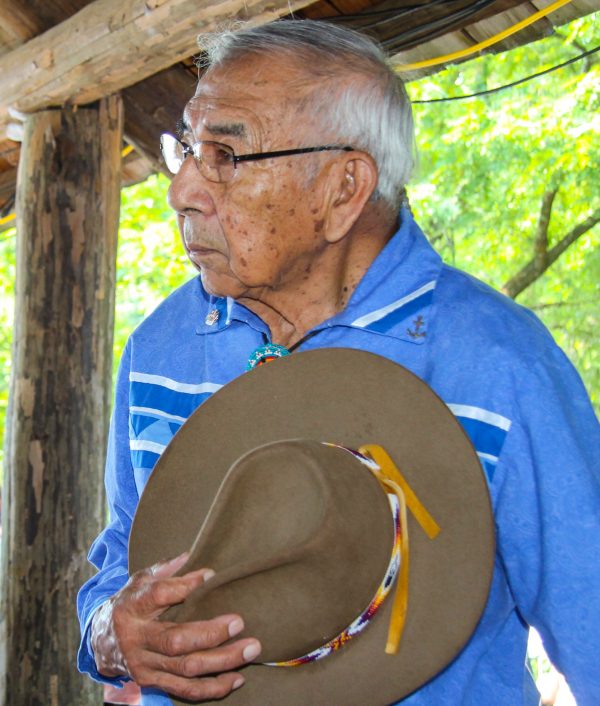 HONORED ELDER: EBCI Beloved Man Jerry Wolfe, shown at the Tri-Council meeting at Red Clay, Tenn. on Aug. 28, 2015, is set to receive an honorary degree of Doctor of Humane Letters from Western Carolina University. During the Tri-Council meeting, he encouraged everyone to help save the Cherokee language. “Our true identity is our language. We must save our language and teach the youth coming along.” (SCOTT MCKIE B.P./One Feather)

He is a U.S. Navy veteran from World War II, a Cherokee historian and storyteller, an Indian ballgame caller, a Cherokee first language speaker, and soon he will be a doctor.  EBCI Beloved Man Jerry Wolfe is set to receive an honorary degree of Doctor of Humane Letters from Western Carolina University during their spring commencement ceremony on Saturday, May 6 at 10am in the WCU Ramsey Regional Activity Center.

“The degree is being conferred in recognition of your lifetime of service and support to the western North Carolina region, the state, and the nation,” Claire Collins, WCU assistant to the chancellor, wrote in a letter to Wolfe.  “Your distinguished service of sharing the Cherokee language and traditions is clear testimony to the appropriateness of this recognition.”

When asked his reaction to learning about the honor forthcoming from WCU, Wolfe, true to form, commented, “Well, it surprised me.”

He said he is looking forward to walking across the stage with his graduation hat on.  “I feel like I have done what was asked of me, nothing special.  I was taught that when people ask things of you, and you are able, you help them out.  But, I am happy that other people feel I have helped and made a difference.”

Wolfe was given the title of Beloved Man of the Eastern Band of Cherokee Indians on April 11, 2013.  It was a designation that hadn’t been made to a man since the early 1800s.

On that day, EBCI Beloved Woman Myrtle Driver spoke of Wolfe’s importance to the Tribe, “Oftentimes, we may come across a word that we don’t remember or we need to know something about our history or our culture, and we can always go to Jerry, and he is always more than willing to help us.  And, I really do appreciate all that Jerry Wolfe has given us.”

Wolfe has been asked to open countless events with a prayer and words of encouragement – none more poignant than those he spoke on Aug. 28, 2015 at a Tri-Council meeting held at Red Clay, Tenn. in which he said, “Our true identity is our language.  We must save our language and teach the youth coming along.”