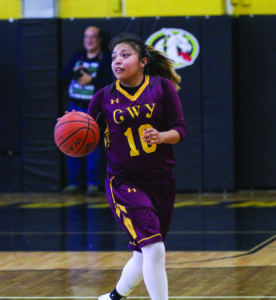 Pooh King, Lady Braves senior point guard, has another award to add to her shelf.  She has been named to the 2016-17 North Carolina Basketball Coaches Association All-District First Team.  King was joined in the honor by Tye Mintz, Braves junior forward, who was named to the boys All-District Second Team.

King, who earlier in the month was named Big Smoky Mountain Conference Player of the Year – an honor she attained for the second consecutive year, lead western North Carolina in steals per game percentage (6.2/gm) and was second in assists (5.1/gm).

In her two years playing with Cherokee, King, a member of the Seminole Tribe of Florida, averaged 15.3pts/gm, 5.5 steals/gm, and 4.4 assists/gm.

She helped lead Cherokee to a 25-3 record this season which saw the Lady Braves win the regular season BSMC title and take second place in the conference tournament. 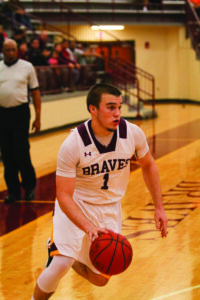 Mintz, who was named to the Big Smoky Mountain All-Conference team, was third in western North Carolina in rebounds per game (11.5/gm) and averaged 19.4 points per game for the Braves who took second in the BSMC regular season and won the conference tournament.