Tribal member to give “Artist Talk” in Jackson County 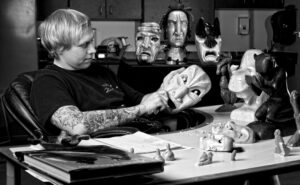 The “Artist Talk” for March 2017, sponsored by the Jackson County Arts Council, will feature Joshua Adams, a wood sculpture artist from the Eastern Band of Cherokee Indians. (Photos courtesy of Joshua Adams)

The “Artist Talk” for March 2017, sponsored by the Jackson County Arts Council, will feature Joshua Adams, a wood sculpture artist from the Eastern Band of Cherokee Indians. He will be discussing his techniques and displaying an arrangement of his works.  This Artist Talk will take place on Monday, March 13 from 6-7pm in the Community Room of the Jackson County Library Complex.  There is no charge for this event.

“Joshua works predominantly in the medium of wood sculpture, but includes stone carvings, paintings, photograph, molding, 3D printing, pottery and videography in his portfolio. His work has been shown in several shows throughout the world. He is a proud member of the Eastern Band of Cherokee, as well as an alumni of Western Carolina University. He is also a member of the Qualla Arts and Crafts Cooperative.

Joshua most recently received a 1st place ribbon in Sculpture at the 2016 SWAIA Santa Fe Indian Market. Previously, he placed 1st at the 2015 SWAIA Indian Market in Diverse Arts. Joshua was also awarded two first place ribbons at the 2015 Cherokee Indian Fair for his entries in painting and traditional masks. His work was also chosen for the Art in Embassies project and is currently on display at the Tanzanian Embassy.

Joshua is part of a long lineage of Cherokee woodcarvers, starting with his great aunt and uncle James and Irma Bradley. Joshua also had the privilege to study under renowned Cherokee artist Dr. James Bud Smith and was directly influenced by legendary Cherokee artists Amanda Crowe and John Julius Wilnoty.”

Artist Talks are sponsored monthly by the Jackson County Arts Council as an effort to celebrate the many artists and art forms in Jackson County.