CLAREMORE, Okla. — An agreement between the Cherokee Nation and city of Claremore worth nearly $20,000 is helping Justus-Tiawah Schools in Rogers County abandon old sewage lagoons in favor of modernizing infrastructure.

Cherokee Nation recently provided the Claremore Public Works Authority with $14,750 to help the city extend sewer lines to Justus-Tiawah Schools, which currently uses a lagoon for the treatment and disposal of sewage. 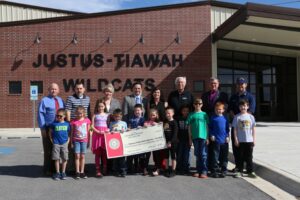 “Cherokee Nation remains a good partner in Rogers County for economic growth and community improvement, and no expansion project means more than one which directly benefits a local school and its mission to educate our kids for a better future,” Baker said. “Now, Justus-Tiawah Schools will be able to do more for its students and make significant upgrades to its campus for healthier, happier students.”

“I am always pleased when I can help find a way to support the schools in District 14. Justus-Tiawah is a school with one of the higher percentages of Cherokee students in the area and has a reputation as a great school. This donation will help put them in a position to grow to meet the needs of the district. I am proud the Cherokee Nation believes in supporting our schools with these kind of investments,” Austin said.

The city of Claremore will tap into an ongoing extension project managed by Cherokee Nation Businesses to run sewer lines to Justus-Tiawah buildings.

Once the city extends sewer lines from the nearby project to the school site, bond funds will aid the school in carrying out other improvements such as connecting to the city’s sewer main and abandoning the lagoons.

“We’re honored to accept this donation from Cherokee Nation, which does so much for public schools. It’s like a shot in the arm,” Garroutte said. “This money helps cover the cost to connect all our buildings to the waste line.”

A second phase of work will result in the removal of lagoons, which will create additional playground space for students of the school, Garroutte said.