TAHLEQUAH, Okla. — Within the first two months of the year, the Cherokee Nation Fire Program has responded to more than 85 fires in Oklahoma, sending crews out this week to fires in Adair, Delaware and Mayes counties and helping with another in Arkansas.

Due to the higher volume of wildfires throughout the Cherokee Nation’s 14-county jurisdiction, the Cherokee Nation firefighters are working with the Zuni Tribe of New Mexico and Spirit Lake Tribe of North Dakota, who were commissioned to Tahlequah by the Bureau of Indian Affairs to help battles these fires.

“This is a fairly large number of fires for this point in the year,” Cherokee Nation Fire Program Coordinator Dwayne Chuckluck said. “It’s been so dry.”

In northeastern Oklahoma, the crew has fought 77 fires in January and February, compared to 32 fires in the same time frame last year. 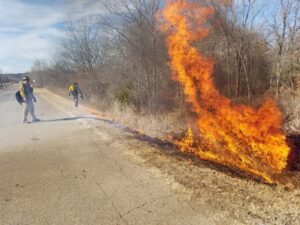 “We continue to expand our protection of the 14-county jurisdiction by fighting fires on trust land in Kenwood in Delaware County, stretching to Washington County near the Kansas border and into southern Adair and Sequoyah counties,” Chuckluck said. “We’ve put out fires in all of our 14 counties this year, and we continue to get more calls from area volunteer fire departments asking for help.”

In recent years, Cherokee Nation’s firefighters, often referred to as firedancers, have helped stop some of the largest wildfires in the country and continue to grow their program.

This year, the program has also helped suppress 10 fires outside the Cherokee Nation, including Osage and Okmulgee counties. Six Cherokee Nation firefighters are also currently working at the Ozark-St. Francis National Forest in Arkansas.

“The Cherokee Nation has worked hard to improve and expand its fire programs and partnerships with the Bureau of Indian Affairs and U.S. Forestry Department, so that we are a tribe that can be depended upon when fires ignite here within the areas of our Cherokee Nation boundaries, or national wildfires that also need our help and resources to suppress,” Secretary of State Chuck Hoskin Jr. said. “The volume of fires that our Cherokee Nation Firefighter Program has worked to extinguish just this year is extremely high, which shows the level of dedication and efforts by our fire crew.”

“If there’s been a lot of fire activities in an area, what we’ve done the last couple of weeks is send a crew, and that way we are prepositioned within a 30- or 40-mile radius of any potential fire outbreak,” Chuckluck said.

Cherokee Nation firefighters like 24-year-old James Tillison, of Tahlequah, are dedicated to the fire service. Tillison has been part of the Cherokee Nation Fire Program for six years and has traveled throughout the tribe’s 14-county jurisdiction to some of the largest wildfires reported.

“Out of the 77 we’ve responded to this year, I’ve probably been sent to 50 of them,” Tillison said. “We had one in Osage that was about 700 acres, and we were there for three days. It can be dangerous, but I never liked a desk job.”