Katy Hall, Mitchell junior power forward, took the ball down the right side of the court and launched a picture-perfect three-point shot at the buzzer of a state playoff second round match-up against the Cherokee Lady Braves on Thursday, Feb. 23.  The ball hit the rim, bounced around, and fell out.  Cherokee (25-2) held on 50-48 to defeat the Lady Mountaineers (14-12) in a back-and-forth game at the Charles George Memorial Arena.

“Both teams were making plays,” said Chris Mintz, Braves head coach.  “That was a good ballgame.  They’re a solid team.  It was a really physical game, and it took us a bit to get adjusted to it.  We showed up at the end and thank goodness they missed that last shot.” 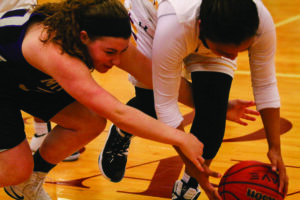 Led by Pooh King with 13 points, the Lady Braves had three players in double digits including Timiyah Brown 11 and Tori Teesateskie 10.  Mitchell was led by Hannah McMahan and Morgan Buchanan who each had 11.

This game was not just close at the end.  It was close the entire time with the biggest lead of the game being five points.

Cherokee and Mitchell matched baskets early, and the Lady Braves led 7-6 midway through the first period.  Mitchell then went on an 8-2 run for the remainder of the period to lead 14-9 at the end of the first.

The first three minutes of the second were tight with Mitchell leading 17-13 at the 4:48 mark.  From there, Cherokee went on an 8-2 run of their own and took a 21-19 lead with just over three minutes left until the half.  The rest of the half was very tight, and the Lady Braves took a 26-23 lead into the locker room. 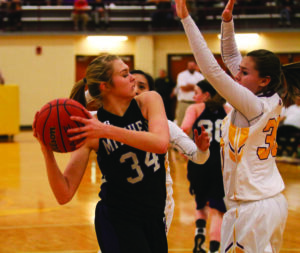 DEFENSE: Cherokee’s Tori Teesateskie plays tight defense inside against Mitchell’s Morgan Buchanan who had 11 points on the night. Teesateskie finished the night with 10 points.

The third period was just about deadlocked with Mitchell slightly edging Cherokee 11-8, and the two teams entered the final eight minutes tied at 34-34.

Cherokee scored the first five points of the fourth to take a 39-34 lead with just under six minutes left in the contest.  The Lady Braves led all of the final period with the Lady Mountaineers right on their heels.  King made a free throw with 8.8 seconds left to make it 50-48.  Mitchell had their look at the end as time expired, but it didn’t fall and Cherokee took the victory.

To view or purchase photos from this game, visit: https://onefeather.smugmug.com/SPORTS/BASKETBALL/LADY-BRAVES-201617/Vs-Mitchell-2nd-round-state-playoffs-February-23/