Tribal Council passed Resolution 502 (2017) with Veto Ratification Sheet on Feb. 2 that called for Articles of Impeachment to be drawn up against Principal Chief Patrick Lambert.  After being approved by a 9-3 margin in Tribal Council, Vice Chief Richard G. Sneed signed the legislation later that day.

Now, Chief Lambert has vetoed the legislation.  In a letter (Resolution 502 (2017) Veto Letter) to Tribal Council Chairman Bill Taylor, dated Feb. 21, he calls the move to impeach him a “witch-hunt”.

“While I am fully aware that there are a small committed few who remain steadfast to ensuring that this impeachment process move forward quickly and attempt to remove me from office, regardless of the law, precedent, facts, and against the clear will of the people of this Tribe,” Chief Lambert wrote in his veto letter.  “However, I have to believe that some on Council still share my vision of looking out for the long-term best interests of this Tribe and that some on Council actually want to hear the truth.” 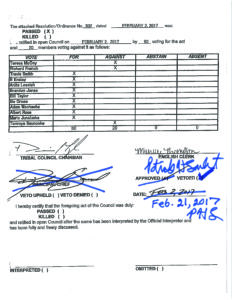 Chief Lambert addresses the report in his letter, “As I said in the last Council session, I am disappointed that Council is relying on a report that did not include any of my discussion of these matters and concerns with Internal Audit during their review, and I am disappointed that Council would move ahead on such thin grounds without first having full and open hearings.  Disregarding due process and other key tenants of the law is not a sustainable position and causes greater distrust of the government by the people.”

Requests for comment from Tribal Council Chairman Bill Taylor, Tribal Council’s legal counsel Carolyn West, and EBCI Attorney General Danny Davis went unanswered by press time.  According to the TOP Office, as of Thursday, Feb. 23, discussion and possible action on the veto is not set as an agenda item for the next regular Tribal Council meeting on Thursday, March 2.