The Cherokee Braves (19-8) and Lady Braves (24-2) both won their first round match-ups in the 1A state playoffs against the same school, Union Academy.  The Lady Braves won 71-25 and the Braves won 80-67 in games played Tuesday, Feb. 21 at the Charles George Memorial Arena. 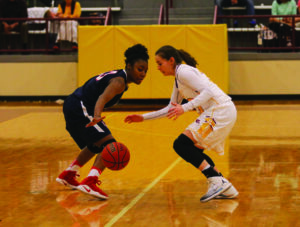 THIEVERY: Cherokee’s Tori Teesateskie (#30) steals the ball from Union Academy’s Lauryn Boyd (#33) during the first half of a game at the Charles George Memorial Arena on Tuesday, Feb. 21. Cherokee won the game, a first round match-up in the 1A state playoffs, by a score of 71-25. (SCOTT MCKIE B.P./One Feather photos)

“Coming back after a loss and putting in a performance like this is very promising,” Chris Mintz, Lady Braves head coach, said after their game.  “We shot the ball well tonight which we’ve been struggling with the last couple of games.  That made a huge difference.  They played hard, and we got through it without any injuries.”

Union Academy actually led early in the contest and scored the first four points of the game.  Two minutes in though, the Lady Braves’ defense kicked in and shut down the Lady Cardinals offense as Cherokee went on a 23-2 run for the remainder of the period to lead 26-6 at the end of the first.

“We knew they had one ball-handler, and if we could get her frustrated, then I thought we had a pretty good chance to run away with it, and that’s what happened,” Coach Mintz commented.

Cherokee continued the pressure in the second period and outscored the Lady Cardinals 32-11.  Carla Wolfe, Lady Braves sophomore guard, got a steal and took it coast-to-coast for an easy layup to put Cherokee up 50-10 with 3:42 left before the half.  That invoked the NCHSAA mercy rule for a running clock for the entirety of the second half.

Cherokee’s bench got extensive play in the second half, and the Lady Braves led 67-18 at the end of the third and ended up with a 71-25 victory. 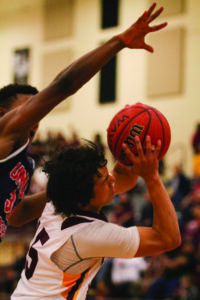 INSIDE: Cherokee’s Blake Smith (#15) goes inside and under Union Academy’s Cameron Phronebarger for a shot during the first half of a first round playoff game at the Charles George Memorial Arena on Tuesday, Feb. 21.

“Lay-ups and free throws, the two basic shots in basketball that we were terrible with tonight,” Sonita Warren-Dixon, Braves head coach, said of their shooting after the game.  “I can never fault our effort.  It’s our execution sometimes.  And, we’re still very young so you’ve got to take the good with the bad because there’s going to be ups and downs with a young group.  But, we live to fight another day, and we can’t ask for more than that.”

The Braves and Cardinals went back-and-forth in the first period.  After a slow start that saw both teams with several blocks and steals, the game was tied at 2-2 at the 5:27 mark.  From that point, the team’s offenses settled some and the baskets started coming.  Union Academy held a slight 14-12 lead after the first period.

The second period was all Cherokee.  In the first two minutes, the Braves went on an 8-4 run to take a 22-18 lead.  They then scored eight unanswered points to lead 30-18 with just over three minutes left until the half.  The last three minutes were tight, and Cherokee led 38-25 at the half.

The third period started with the Braves scoring eight unanswered again to lead 46-25.  But, the Cardinals came back and outscored Cherokee 15-6 for the remainder of the period, and the Braves led by 12 (52-40) at the end of the third.

Union Academy pulled to within seven points (63-56) midway through the fourth, but it was as close as they would get as the Braves pulled away in the last few minutes and took the 80-67 victory.

Scoring statistics were not available for this game.

To view or purchase photos from the Lady Braves game, visit: https://onefeather.smugmug.com/SPORTS/BASKETBALL/LADY-BRAVES-201617/Vs-Union-Academy-1st-Round-State-Playoffs-February-21/

To view or purchase photos from the Braves game, visit: https://onefeather.smugmug.com/SPORTS/BASKETBALL/BRAVES-201617/Vs-Union-Academy-1st-Round-of-State-Playoffs-February-21/