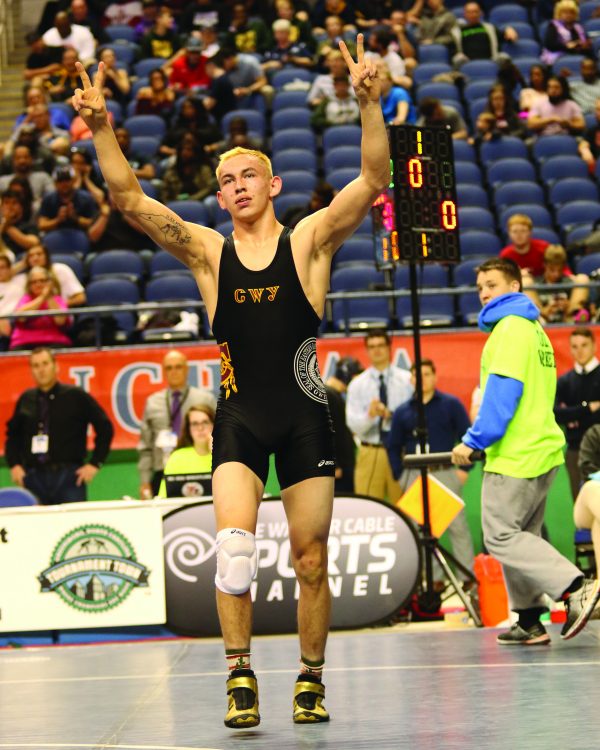 REPEAT: Anthony Toineeta, an EBCI tribal member and senior at Cherokee High School, raises his hands above his head in victory signifying his second state title in two years. He won the 160lb division at the 1A state wrestling meet in Greensboro on Saturday, Feb. 18. (Photo by Amble Smoker/The Smoker Agency)

GREENSBORO – Anthony Toineeta (52-2) is the first two-time state champion in Cherokee High School history.  He won the 1A 160lb state championship with a 12-0 major decision over Tanner Whitman from Rosman at the state championship meet at the Greensboro Coliseum on Saturday, Feb. 19.  Toineeta defeated Whitman by fall to win the 1A West Regional title a week earlier.

Toineeta did not concede a single point in the state championships winning by technical falls (17-0) over Landen Katz (East Carteret) and (15-0) over Lucas Andrews (Avery).

This is the second ring for Toineeta as he won the championship last season in the 145lb division.

At the state championships, Toineeta was joined by teammate Jesse Queen who qualified in the 138lb division after placing third at the regional meet.  At the state meet, Queen lost by fall to Louis Tortual (Rosewood) and to Alexander Gonzalez (Neuse Charter).

Other Smoky Mountain finishers at the state meet included: