Livia Lambert has aspirations of joining the science field and study human and animal behavior.  The EBCI tribal member and senior at Cherokee High School will represent her Tribe and school as a North Carolina delegate to the Congress of Future Science and Technology Leaders event being held in Lowell, Mass. near Boston on June 29 – July 1.

“It’s a program to give people as much guidance as they can if they want to go into the science and technology programs in life,” said Lambert of the event which is being hosted by the National Academy of Future Scientists and Technologists.

Lambert has already been accepted to six of the eight colleges she has applied to, and she’s awaiting word next month on the other two before she’ll make her final selection of a school, but she’s already pretty certain what her field of study will be.  “I’m very interested in human behavior and animal behavior and those types of sciences.  I just haven’t decided which I’ll study yet, but for sure in that area.” 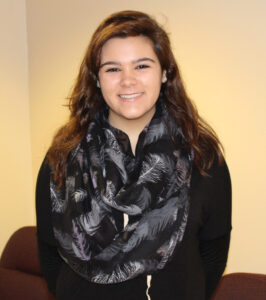 FUTURE SCIENTIST: Livia Lambert, an EBCI tribal member and senior at Cherokee High School, has been chosen to serve as a North Carolina delegate to the Congress of Future Science and Technology Leaders event being held in Lowell, Mass. near Boston on June 29 – July 1. (SCOTT MCKIE B.P./One Feather)

She’s very much looking forward to her trip in June for the science opportunities as well as other reasons.  “I’ve never been to Boston before, and I’ve always wanted to go so I’m super-excited about that.  Anytime I get to go to a big city, I love it.”

According to information from the National Academy of Future Scientists and Technologists, “The purpose of this event is to honor, inspire, motivate and direct the top students in the country who aspire to be scientists and technologists, to stay true to their dream and, after the event, to provide a path, plan and resources to help them reach their goal.”

Lambert said she’s looking forward to hearing the speakers at the event and learning about all the different fields of science and technology.  “I’m always excited to learn more.  I like the engineering and editing of computer science.  I don’t have a ton of experience in the STEM (science, technology, engineering, and mathematics) area, just what I’ve learned through high school, so whatever they have to offer will be good.”

Lambert was nominated for the opportunity by Susan Reiser, UNCA lecturer and associate dean of natural sciences.  Reiser has been Lambert’s instructor in an Introduction to Multimedia and Computer Science class that she took as part of a joint program between UNCA and Cherokee High School.

Richard Rossi, National Academy of Future Scientists and Technologists executive director, commented, “This is a crucial time in America when we need more nimble-minded and creative scientists and technologists who are even better prepared for a future that is changing exponentially.  Focused, bright and determined students like Livia Lambert are our future and she deserves all the mentoring and guidance we can give her.”