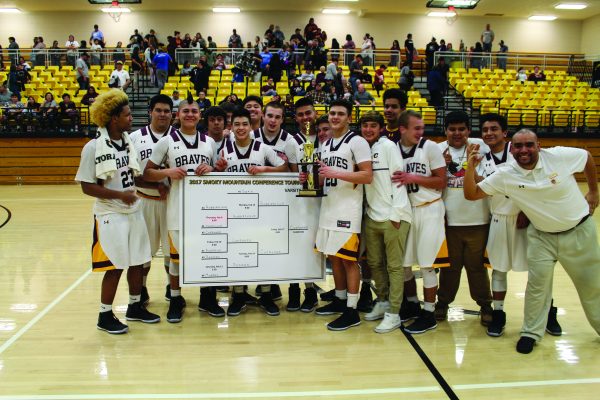 HAYESVILLE – The Cherokee Braves (18-8) won their second Big Smoky Mountain Conference tournament title in a row on Friday, Feb. 17.  After finishing second in the conference in the regular season, the Braves put together three wins in the tournament, played at Hayesville High School, including a 65-57 win over the Robbinsville Black Knights in the finals on Friday.

“It feels good because we got a little redemption,” said Sonita Warren-Dixon, Braves head coach, after Friday’s championship game.  “The two teams (Rosman and Robbinsville) that beat us to keep us from winning the regular season conference title, we were able to knock them off the second time around, and I think that’s the thing that we felt the best about.”

In the tournament, Cherokee defeated Andrews 68-59 on Friday, Feb. 10 in the first round and then won 76-69 over Rosman in the semi-finals. 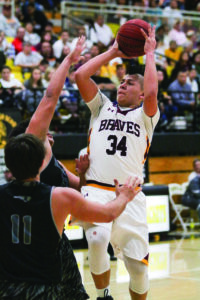 MIDDLE: Sterling Santa Maria (#34), Braves freshman guard, goes for a short jump shot in the middle of the key against two Robbinsville defenders. Santa Maria scored 13 points in the final and 45 in the tournament.

Led by Holden Straughan, junior forward, with 18 points, a total of three Braves were in double digits in scoring in the finals including Tye Mintz (14) and Sterling Santa Maria (13).  On the tournament, those three were very close in production with Straughan having 47 points followed by Mintz 46 and Santa Maria 45.

In the finals on Friday, Cherokee jumped out early on the Black Knights and led 8-0 just a few minutes in.  Mintz scored 11 of his 14 points in the first period before getting into foul trouble, and the Braves led 18-12 after one.

Cherokee started the second period in very similar fashion to the first one and went on an 8-1 run in the first two minutes to lead 26-13.  But, the Black Knights got some offense going and pulled to within four (34-30) by the half.

The third period was pretty even with Cherokee edging Robbinsville 11-10 to take a 45-40 lead into the final period.

The Braves pulled away some in the fourth, leading by as much as 12 as one point, and went on to take the 8-point (65-57) win and the tournament title.

The Braves start the 1A state playoffs on Tuesday, Feb. 21, and Coach Warren-Dixon is happy with where the team is at, but is hoping to make a few adjustments.  “We weren’t as efficient as I’d like us to be on offense,” she said of the team’s overall play in the tournament.  “Somehow, our offense is getting stagnant, and that’s a thing that we’ve been trying to work on.  We’ll have good stretches, and then we’ll revert back to ‘me, me, me’ and we don’t play as a team.  So, if we can curtail some of those mistakes.  I like what we’re doing defensively, but we’ve got to fix some things offensively.”

The Cherokee Lady Braves (23-2) lost only their second game of the season in the finals of the Big Smoky Mountain Conference Tournament on Friday.  The 64-58 loss to Murphy, whom Cherokee defeated twice in the regular season, broke the Lady Braves’ 32-game conference win streak. 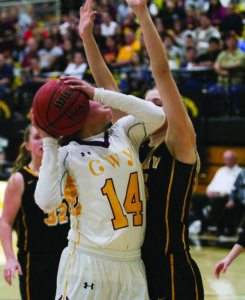 GOING UP: Shelby Wolfe (#14), Lady Braves sophomore forward, goes up for a shot against Murphy’s Emma Stroup during the finals of the Big Smoky Mountain Conference tournament at Hayesville on Friday, Feb. 17. Wolfe led Cherokee with 15 points in the final.

“We didn’t make enough plays,” Chris Mintz, Lady Braves head coach, said after the Murphy game.  “Our free throws went south on us.  We played a good team, it was a close game, and those things matter.  They were putting their free throws in, and we didn’t.”

After receiving a first round bye, Cherokee defeated Robbinsville 66-56 on Monday, Feb. 13 in the semi-finals to advance to Friday’s final against Murphy.

Jamie Lossiah, Lady Braves junior guard, hit two three-point shots early in the second to pull Cherokee to within four (18-14).  Murphy kept a constant inside game going and was able to extend their lead to nine (29-20) at the half.

Cherokee came out for the third period on fire.  Led by Shelby Wolfe, junior forward, who scored nine of her 15 points on the night in the first few minutes of the third, Cherokee was able to take a 31-29 lead three minutes in, and the Lady Braves led 42-41 at the end of the third.

The first five minutes of the fourth period were back-and-forth, and Murphy didn’t lead again until just under three minutes left in the game (51-49).  They extended that lead to six (56-50) with 1:28 left.  The final 88 seconds was a score fest with both teams racking up eight points for a final score of Murphy 64 Cherokee 58.

Shelby Wolfe led Cherokee in the final with 15 points followed by Pooh King 9, Lossiah 8, and Raylen Bark 7.  For the tournament, Wolfe led with 25 points with King and Tori Teesateskie both scoring 22.

Coach Mintz is looking forward to the 1A state playoffs that start Tuesday, Feb. 21.  “I told them that the regular season and the tournament are something that we’ve done and we put it up on a shelf.  It’s nice, and it’ll always be there.  But, Tuesday starts a whole new season.  Everybody is 0-0.  If you win, you get to move on to the next game.  If you loose, your season is over.  It doesn’t matter if you were conference champion or you weren’t conference champion now.  You’ve got to step up, and let’s play.”

To view or purchase photos from the Braves vs Robbinsville game, visit: https://onefeather.smugmug.com/SPORTS/BASKETBALL/BRAVES-201617/Vs-Robbinsville-SMC-finals-February-17/

To view or purchase photos from the Lady Braves vs Murphy game, visit: https://onefeather.smugmug.com/SPORTS/BASKETBALL/LADY-BRAVES-201617/Vs-Murphy-SMC-finals-February-17/