ON THE SIDELINES: Look mommy…a dinosaur!

My wife, daughter, and I enjoy watching YouTube videos featuring the paranormal or cryptid creatures.  Last night, while watching one entitled “real dinosaur caught on tape”, I began to really identify with that fake (really, really bad fake at that…about on par with the SyFy Network) dinosaur that ran across the road.

I’m 45-years-old, and my lower back and knees sometimes hurt from years of playing competitive volleyball.  But, that’s not why I feel like a dinosaur.

It has to do with that large camera I carry around at each game.  It seems that the art of photography with an actual camera is really going by the wayside, especially as it relates to photojournalism and sports photography.

I get asked every now and then to serve as a judge for various news associations contests.  Recently, I was a judge for the New York Press Association annual contest in which I judged several sports action photo categories.

One thing that’s always interesting about being a judge for these is the varied interests that different communities have.  While football and basketball reign supreme here, there it was lacrosse, volleyball and sailing…yes, sailing.  I have no idea how anyone would cover sailing.  I guess we would have to get the One Feather schooner.

But, I digress…some of the photos in the contests were just amazing while others looked like I took my glasses off and drew them with a dull crayon.  As I was judging, I got a little sad though thinking about how our industry is changing and that my fellow sports photographers seem to be going by the wayside more and more.

According to the U.S. Bureau of Labor Statistics, there were 124,900 professional photographers in the year 2014.  In the next ten years, BLS predicts that the overall number will rise 3 percent with portrait photographers seeing a rise of 9 percent.  But, those of us in the photojournalism and sports photography fields who work for news agencies will see a 41 percent drop.

That is already being felt. 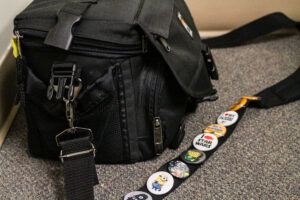 Sports Illustrated, as the name has always implied, has been at the forefront of the visual sports game since its inception.  Their sports images are what all of us aspire to…

In 2015, Sports Illustrated laid off all six of its staff photographers.  That came as a shock to me on two fronts – one being that they laid off their entire staff and two being that they had trimmed down to only six.  SI spokesman Scott Novak said in a statement at the time, “It was a strategic decision to approach photography in a bold new way that will give us access to more resources around the world and to maintain the standard of quality that Sports Illustrated fans are used to.”

In other words, they have begun using more photos from services such as the Associated Press and Getty Images and would rather pay freelancers to cover games than pay for their staff photographers to attend the games.

Two years earlier, the Chicago Sun-Times laid off every single one of its 28 staff photographers.  They did hire back four of them, but that was a bold move and one that seems to be the norm rather than the exception.

With the ever-evolving cell phone camera, more and more people are taking photographs at events, and we have a new generation coming up that many times doesn’t really see a difference in a cell shot or a perfectly-framed, in-focus sports shot.  They want to hit like on both photos and keep scrolling on their social media.

I’m hoping that the art, yes art, of photography doesn’t die, and maybe it won’t, and those of us still toting around camera bags and lenses and monopods at games and news events will keep on polishing our dinosaur scales so as to make sure it’s around at least a little longer.