The aisles of Cherokee Food Lion were alive with the sounds of the Cherokee language being spoken on the evening of Wednesday, Feb. 15.  Students in the early childhood program at New Kituwah Academy practiced their language skills and learned some new words and phrases as they shopped for various items with their families.

Kelly Murphy, New Kituwah Academy family partnership/lead teacher, said the idea for the shopping outing came from a training session she attended in New Mexico.  Other immersion schools have used a similar program they call “Taking Back Your Domain”. 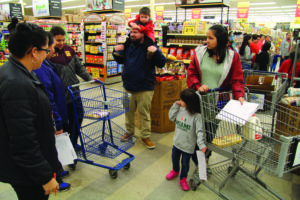 LANGUAGE SKILLS: Students in the New Kituwah Academy early childhood program, along with their parents, participated in a program at Cherokee Food Lion on the evening of Wednesday, Feb. 15 in which they shopped using the Cherokee language. (SCOTT MCKIE B.P./One Feather photos)

Murphy commented, “Families come into grocery stores all the time, and we thought it would be cool for them to come to the grocery store and use their language skills.  This is something that we wanted to do for the parents that they could use with their children after school and on the weekends.”

She said this outing is the first of future trips with the next one being going out to eat.  “We want to stay in the language while we eat, talk about the day, little stuff like that while we’re eating, and explain the food that we’re eating – all in the language.”

Renissa McLaughlin, Kituwah Preservation and Education Program director, noted, “We could do language classes, and we haven’t seen a lot of success because people are distracted at the end of the day.  So, Kelly and I brainstormed on ways to get the parents more involved because we’ve always had a strong parent group.  They’re very involved.”

The idea of an evening trip to the supermarket took shape and worked well she said.  “This gives us an opportunity to have the kids and the parents together doing an activity so it just sort of reinforces what our school is about.  Kituwah is a family, and these outings help reinforce that.”

McLaughlin was thrilled with the turnout and participation during Wednesday’s event.  “We’re really excited.  It’s 6:30pm on a Wednesday, and they’re taking time out of their day to come learn Cherokee language and support their kids at the school.  It’s awesome and more than we could ever hope and pray for, and I’m really happy.”

Prior to the shopping excursion, Murphy distributed hand-outs with the following Cherokee phrases and words that were used throughout the night: 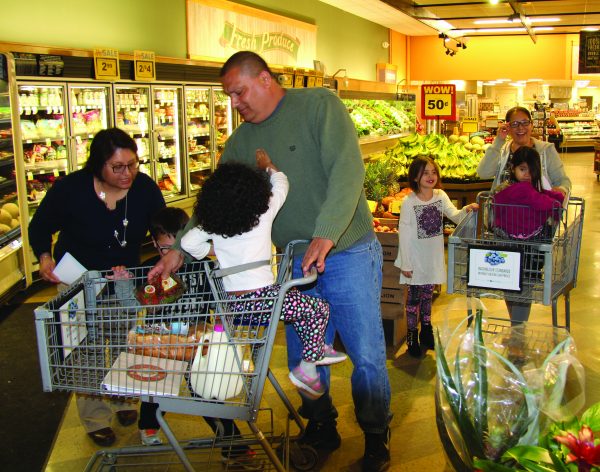