As director of Western Carolina University’s Cherokee Center, Sky Sampson is a liaison between the university and the Eastern Band of Cherokee Indians.

When Sampson learned that WCU chose Cherokee as its campus learning theme for the 2017-18 academic year, she couldn’t wait to relay the news to the Cherokee community. After a campuswide vote, Cherokee was the overwhelming choice as the next theme. The official title is “Cherokee: Community. Culture. Connections.”

“We’re super excited about this opportunity, especially since the overall population at WCU selected Cherokee as the next theme,” said Sampson, a members of the Eastern Band. “Those results give me a personal sense of pride in knowing that others are reaching out to learn more about our people and our culture. We can’t wait to see what’s in store for the coming year within this fantastic collaboration.” 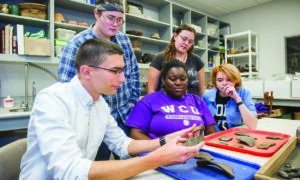 THEME: Ben Steere (left), assistant professor of anthropology and co-director of Cherokee Studies Program, says it should be easy to integrate the Cherokee theme into classrooms campuswide. (WCU photo)

For the past seven years, WCU has selected an interdisciplinary theme for campus conversations, curricular and co-curricular connections, and enrichment. For the first time, faculty, staff and students were able to vote on the theme. With more than 630 votes cast among six choices, Cherokee received nearly a third of the votes.

Carol Burton, associate provost for undergraduate studies, said this is an opportunity for WCU to engage the community.

“What we haven’t done well as an institution is be really explicit about our community engagement,” Burton said. “And we probably haven’t always honored our relationship with the Cherokee as much as we could and should have. We have made some strides, particularly recently. What a great opportunity this is.

“It will afford us an opportunity to really dig in and not just articulate better our relationship with the Cherokee, but build on it, enhance it, and more importantly, educate our students and faculty and staff about the Cherokee and this beautiful place where we are and its importance. I’m very excited about the theme.”

Because WCU literally sits on what was formerly Cherokee land, and the Qualla Boundary is roughly 30 minutes from Cullowhee, the theme can easily be integrated into classrooms, and used to educate faculty and staff members on the Cherokee culture, said Ben Steere, assistant professor of anthropology and co-director of Cherokee Studies Programs.

“I think there’s going to be a lot of different opportunities for faculty and staff all over campus,” Steere said. “It might be obvious in terms of history and culture and literature, but also things like cooking and crafts and music and sports. Think about Cherokee stickball, for example. That could be really interesting for maybe our sport management majors to think about.

“I think it’s going to be a surprisingly easy integration across different units on campus. This can be really hands-on for students, which makes it a little more real and more engaging.”

The theme will give the university community a chance to learn from the Cherokee people and see them as experts, get their perspective on ideas about culture and history, and develop a balanced collaboration, Steere said.

Lisa Bloom, chair of the steering committee for the Cherokee theme and the Jay M. Robinson Distinguished Professor of Educational Technologies, said she would like to see students become more engaged in the theme, something that hasn’t always happened.

“I think it will help our students understand their sense of place, that we’re here on Cherokee ground and the historical significance of that, and that the Cherokee are still a vibrant culture and the people are still here,” Bloom said.

The current theme, “Africa: More Than A Continent,” was the first two-year theme. While Burton was pleased with its success, she said its length has begun to wear on some people.

A buzz already has generated around the Cherokee theme, Burton said, noting that Sampson has received numerous requests to speak to classes and the theme hasn’t officially begun yet.

“I’d like to see a lot of the WCU faculty and students get educated, obviously not on all of Cherokee culture, but I just want to give them a reason to dive into something about our culture, whether it’s crafts, our community, our traditions, our song and dance, whatever it is that they’re interested in,” Sampson said. “We want to rub off on people.”