The Eastern Band of Cherokee Indians has opened a Legal Assistance Office to do exactly what its name says, assist tribal members with various legal issues.  Established by Ord. No. 118 (2016), ratified by Principal Chief Patrick Lambert in June 2016, the Office is just recently fully staffed and is already working to achieve its goals.

“I’m passionate about increasing access to justice in Indian Country,” said Bonnie Claxton, Legal Assistance Office program manager, who is an enrolled member of the Chickasaw Nation and studied in the Indian Law Program at the William Mitchell College of Law in St. Paul, Minn.  “We very much hope to practice a ‘community lawyering’ model of working with the community and empowering our clients to achieve their goals through the law.”

Some of the services already being provided by the Office, free of charge to EBCI tribal members, include: preparing wills and power of attorney documents, representing tribal employees in corrective action cases, and the representation of parents in Family Safety cases.  “Soon, we will be taking domestic violence cases as well for people seeking domestic violence protection orders, and we’re working on some projects that are going to help to with private child custody cases.”

The Legal Assistance Office is under the Office of the Attorney General.  “But, we’re separated out from them due to the potential conflicts of interest,” Claxton explained. 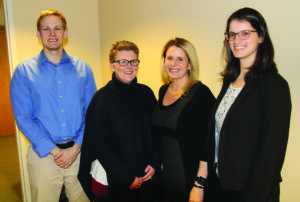 Tim Lewis, legal services attorney who graduated from Wake Forest School of Law, is handling the preparation of wills and said the Office will give a will worksheet to those making appointments that includes basic information such as name, address, etc.  “If they are unable to pick up one of those and fill it out beforehand, then that will be prepared whenever they arrive for the initial consultation which lasts around 45 minutes.  I recommend them bringing deeds, or any other things from the (BIA) Realty Office, to show that they have possession of the tribal land.  If they have any titles to vehicles, they will need to bring those in, because nine times out of ten people like to give those to their kids as well.”

He said the turnaround from initial visit to completed will has been around two to three weeks.

Shelli Buckner, legal services attorney who graduated from the University of Miami School of Law, will be representing EBCI tribal employees who have received a corrective action and seek legal aid.  She said the process of help is currently being developed as they are a brand-new office.  “Similarly, the more documentation someone can have available when they come to meet with me the better; any documentation pertaining to the current corrective action or prior corrective action, policies that may be applicable, dates and names of people that have some connection to their employment.”

She said each one will be handled on a “case-by-case basis” due to the facts of each case, and Buckner says they will work collaboratively and cooperatively with other tribal programs doing similar work.

Denise Hallauer-Fox, legal services attorney who graduated from the Mercer University School of Law, will be representing clients on various family services cases.  “I want to make it clear to parents that I do not work for Family Safety…I represent the parents.”

She added, “Typically, if a petition is filed with the court by Family Safety, that’s what triggers it going into the court system.  At the first court hearing, whether that be a non-secure or a pre-adjudication type hearing, the judge will appoint counsel if the parents choose to have appointed counsel…at that point, they would receive me.”

Hallauer-Fox praised the Cherokee Tribal Court for their part.  “The court has been very cooperative, and they’re doing a fabulous job of getting me worked into the system.”

In addition to the individual services described above, the Legal Assistance Office is working to set up a Legal Self-Help Kiosk in the Qualla Boundary Public Library.  The kiosk will include digital forms that can be filled out on a computer as well as pre-printed forms that can be filled in manually.  There will also be legal brochures on issues that people can easily handle on their own.

Claxton does add, “Not every legal issue is appropriate for self-help as some things are just very complicated.  But, simple divorces and the new kinship/guardianship forms, once that law gets ratified, will all be available there.”

The Office is also planning community education forums that will help with the filling out of the forms found at the kiosk.

Claxton said she hopes her office will be able to expand into elder law more in the future.  “So, that will include elder abuse, not just representing people in those cases but also maybe changing some of the (Cherokee) Code around that.  We’re trying to get the immediate needs met now, but we are looking to that because we hear, in the community, that that’s a real need for people.”

Soon, her Office will develop written in-take guidelines that outline exactly what types of cases they accept.  There will be an upcoming public meeting on those rules once they are completed, and comment will be taken from the community.