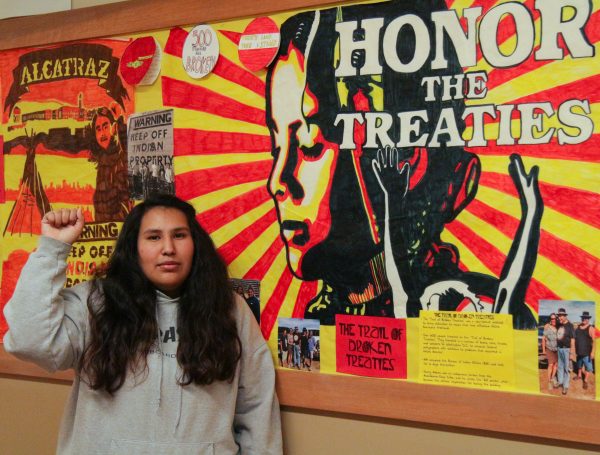 POWER: Lou Montelongo, a senior at Cherokee High School, stands in front of a mural art project about the American Indian Movement and Indian activism that she completed for her senior project. (SCOTT MCKIE B.P./One Feather photos)

The American Indian Movement (AIM) started in Minneapolis in 1968.  Its message spread from that inner-city environment to reservations and throughout Indian Country like a wildfire in the late 1960s and early 1970s.

Lou Montelongo, a senior at Cherokee High School, explores the history and message of AIM and its activism on behalf of American Indians in a mural display she created for her senior project.

Her mural covers various events and causes AIM has sponsored over the years including: Trail of Broken Treaties, Wounded Knee occupation in South Dakota, and The Longest Walk.

“My family was on the Longest Walk, and my grandma, Nora Montelongo, was on the Longest Walk,” she said in talking of the 1978 event sponsored by AIM.  “I talk about how they organized this to walk from San Francisco to Washington, DC to protest threats that were coming in on tribal lands and also water rights.  The Walk was intended to symbolize the forced removal of American Indians from their homeland, like the Cherokees, and to draw attention to the problems of Indian people in the communities.”

Her display transitions into current-day activism, notably the protests surrounding the construction of the Dakota Access Pipeline near the Standing Rock Sioux reservation in North Dakota.  “This is something I’m very passionate about,” Montelongo commented.  “I taught the kids about the Energy Transfer Partners, the major private company building the pipeline that will transfer 470,000 barrels of oil per day, and I talked about how it is going to be put under the Missouri River which is a prime water source for the Standing Rock Sioux as well as 17 million people downstream.”

She continued, “So, I spoke about how the pipeline is hazardous to the water supply if the pipeline was to bust and that it was also infringing on sacred ceremonial grounds of the Standing Rock Sioux.” 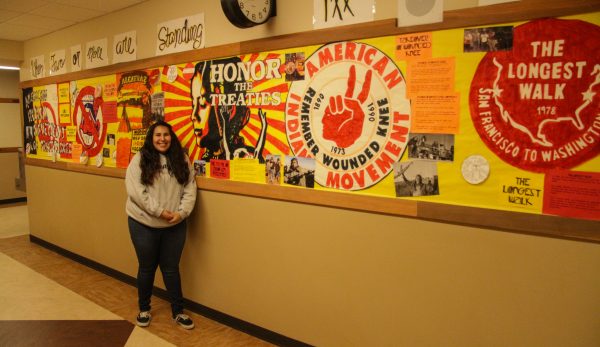 Her display also covers the Sacred Stone Camp, established in April 2016, which sprung up as a peaceful place to organize protests against the pipeline.  “It started as a small prayer group and it started growing in numbers…I just wanted to bring attention to how things are happening on their reservation and how it’s important that we step in and we help our fellow natives because this is the first time in many years that all of these tribes have come together.  Before colonization happened, we were fighting against each other, but now we’re coming together to fight.  And, the cause is clean water which every one of us needs.”

Montelongo’s mural traces the history of American Indian activism, and in doing so, she highlights how that movement has changed and developed over the years.  “Although the American Indian Movement isn’t together like it was back in those days, there are still people that are involved and helping today.  It’s changed so much since the takeover at Wounded Knee.  Where it was violent and people were ready to fight and die, now they’ve moved on to non-violent, direct action which I thought was amazing.”

Madison Rogers, CHS American History teacher, served as Montelongo’s mentor for the senior project and praised her efforts.  “I think she’d be a good lobbyist in D.C.  They need people there so that people are aware…she’s so passionate.”

Montelongo, who has aspirations to study law in the future, shared the message included in her mural in Rogers’ class.  “I just wanted to show the kids a little bit about the American Indian Movement.  Many times it’s controversial, and people think they were a radical movement, and I just wanted to prove that although it may have seemed radical at the time, all they wanted was basic rights for Native Americans.”

The reaction to the mural has been positive relates Montelongo.  “A lot of people have come and told me that they enjoyed what I taught them in classes, and I’ve seen a lot of people just stop and look at it which is exactly what I wanted.”

She summed up her mural and the movement, “It’s changed so much throughout the years, but we’re still fighting though for basic rights for Native Americans.”