MURPHY – The Cherokee Lady Braves (20-1) captured the Big Smoky Mountain Conference title on Saturday, Feb. 4.  Cherokee won its sixth conference title in the past seven years with a 57-49 win over the Murphy Lady Bulldogs (20-2).

“It’s awesome,” Chris Mintz, Lady Braves head coach said immediately following the game.  “This was our second goal of the season. They came out and executed good some times, but it was a tough game.” 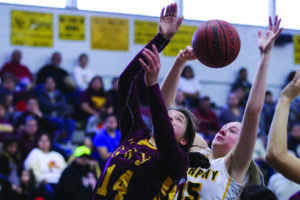 Cherokee’s win was its second over Murphy on the season and constituted the only two losses the Lady Bulldogs have suffered all year.  Coach Mintz praised his team’s inside game in dealing with a height differential that favors Murphy.  “We did good. We battled. Our inside girls played their tails off, and that’s all I can ask from them.”

The Lady Braves had three players in double-digits in scoring including Tori Teesateskie, sophomore guard who led with 15.  She was joined by Raylen Bark, freshman guard with 13, and Pooh King, senior point guard with 11.

The Lady Braves started out on fire in this game and led 8-0 at just over two minutes into the game.  They expanded that lead to 11-2 with just under four minutes left and finished the first period leading 17-4. 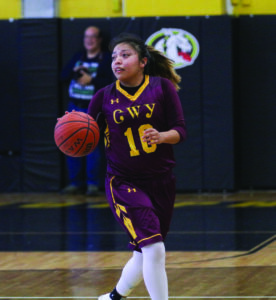 DOUBLES: Pooh King, Lady Braves senior point guard, brings the ball up the court. She finished the game with 11 points as three Cherokee players finished in double-digits including her, Tori Teesateskie (15), and Raylen Bark (13).

The Lady Bulldogs got  their footing in the second period barely edging Cherokee 14-13, but the Lady Braves took a 12-point (30-18) lead into the locker room.

Murphy actually outscored Cherokee by two points for each of the last two periods (13-11 in the third and 18-16 in the fourth), but the Lady Braves’ lead was too much and they took the conference and the 57-49 victory.

The win marked the 31st consecutive Big Smoky Mountain Conference victory for the Lady Braves.  They will enter the conference tournament with the number one seed, and will play a yet-to-be-named opponent at Hayesville on Monday, Feb. 13 at 6:30pm.

To view or purchase photos from the game at Murphy, visit: