“We needed a win, for confidence’s sake,” Sonita Warren-Dixon, Braves head coach, said after Saturday’s game. “We’ve just been a little down lately, I think. We had it tough the way the scheduling was. But, you don’t make excuses. You have to come to play every night, and we needed to get this one. And, I’m proud of the way they stepped up.” 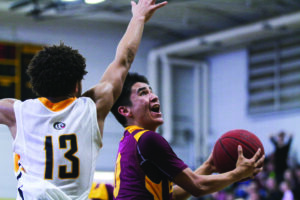 After winning an emotional game at Swain on Jan. 26, the Braves lost their next three including losses at Robbinsville and Rosman and a home loss against Swain on Friday, Feb. 3, the night before their big win at Murphy on Saturday.

“The thing I told them is there is no pressure at all,” Coach Warren-Dixon told her team prior to Saturday’s game. “They play this game because they love it and I needed them to come out here and play with the passion and love that they have for basketball, and everything else will take care of itself.” 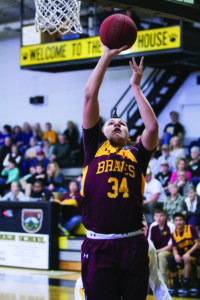 EASY UP: Cherokee’s Sterling Santa Maria puts one up for two.

Saturday’s game at Murphy began very even with both teams matching basket-for-basket in the first period which ended in a 22-22 tie. The tit-for-tat kept going in the second period with Murphy edging the Braves 11-8 to take a 33-30 lead into the locker room.

Cherokee came out for the third period on fire outscoring the Bulldogs 23-10 to lead by ten going into the final eight minutes. Murphy pulled to within four points at one time in the fourth period before Cherokee turned it on outscoring Murphy 14-10 to take the 67-53 win.

The Braves are expected to get the number two seed in the Big Smoky Mountain Conference tournament and are tentatively scheduled to play an as-yet-named opponent (i.e. #7 seed) on Friday, Feb. 10 at 8pm at Hayesville.

To view or purchase photos from the game at Murphy, visit: https://onefeather.smugmug.com/SPORTS/BASKETBALL/BRAVES-201617/At-Murphy-February-4