BASKETBALL: Feather back from injury, ready to go for Rabun Gap

Meona Feather is doing what she loves to do, and it’s been awhile since she’s been able to do it.  The EBCI tribal member is a senior member of the Rabun Gap-Nacoochee School (Ga.) varsity girls basketball team, and she is just back on the hardwood following a serious knee injury.

“It feels good to be playing again because it’s been awhile, and I have definitely missed it,” Feather commented.  “With rehab, I didn’t do anything different than what the doctors asked for.  The one thing everybody told me was just listen to your body, and I did.”

She has definitely been missed on the court.

“Meona is doing very well since returning,” said Dale Earnhardt, Rabun Gap-Nacoochee head girls basketball coach.  “I feel like she put in great effort to rehab during the fall so that she could return for the last month of her senior season.  Coming back from a knee injury is a tall order for a basketball player.  Meona being back on the court in just over six months from her surgery says a lot about her determination.” 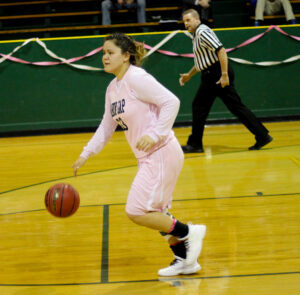 Coach Earnhardt said his team has missed Feather being on the court earlier in the season.  “She understands the game so well and is such a great passer and floor general…not to mention scorer.  Her passion for the game and for winning is something that we missed terribly while she was out.  That is such a major part of her leadership skills.  Meona leads by example leaving everything she has on the court during a game, no matter what the score may be.”

He added, “Her ability to score is what we have missed the most.”

Feather said certain aspects of her game have changed since her injury.  “I am not fully capable of moving and doing some of the things I was able to do in the past.  I know it will take time to get back to where I was, but I’m just happy to be back on the court whether it’s for 32 minutes or five minutes.”

Her coach and teammates are happy she’s back as well.

“Meona is the best pure shooter I have ever coached in my 17 years of varsity girls basketball,” commented Coach Earnhardt.  “Even in limited minutes, she still has the capability of scoring double figures in every game.  She will now give us three scorers on the court at one time which we have desperately needed this season.  Her ability to see the floor and find open players will allow us to put more points on the scoreboard.”

As of Tuesday, Jan. 31, she’s played in four games so far this season and is averaging 7.5 points/game which ranks her third top scorer on the team.  Last year, Feather was named the Carolinas Athletic Conference (CAA) Player of the Year and she helped lead the Lady Eagles to a state semifinal game where they lost to Providence Day School who went on to win their seventh consecutive state title. 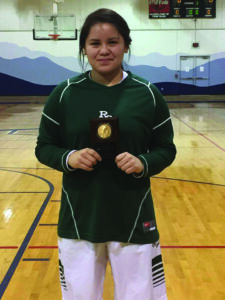 ALL-STATE: Feather holds a plaque she received last year for being named to the NCISAA All-State team, an award she’s won three times.

Coach Earnhardt is confident that having Feather back in the line-up will bode well for his team come playoff time.  “As she gets stronger and in better ‘game-shape’, I believe we can make another serious run in the NCISAA playoffs in a few weeks.”

Feather is set to graduate this spring, and while she doesn’t have concrete plans yet, she does have a path.  “There are a couple of schools interested in me for basketball and academically-wise.  I’m looking at colleges not just for basketball purposes, but also location and academics play a huge part.  Whatever college I decide to attend, I do plan on playing basketball there.”

She is debating on whether to major in nutrition or sports medicine, but she’s sure on where she wants to work.  “Whatever I study, I know I want to come back to Cherokee and maybe travel to other Indian reservations to help better the community whether it has to do with basketball or leadership.  My biggest goal is to let every other Native American know that they can do whatever they set their mind to.”

Feather had this message for her fellow members of the Eastern Band of Cherokee Indians, “I just want to say thank you to all the people that have supported me throughout the years while I’ve been here at Rabun Gap.  I hope I have represented my people well, and I want to continue to represent them to the best of my ability.  Because, no matter where I am, Cherokee will always be my home. Sgi.”