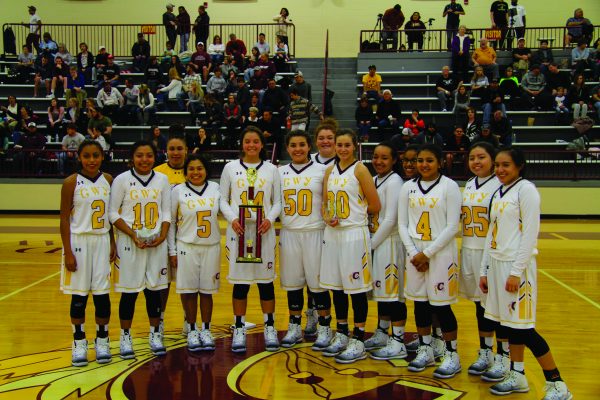 HARDWARE: The Cherokee Lady Braves pose with the second place trophy they won in the Holidays on the Hardwood Tournament played Dec. 21-23 at the Charles George Memorial Arena. (SCOTT MCKIE B.P./One Feather photos)

The Cherokee Lady Braves (6-1) took second place in the Holidays on the Hardwood Tournament held Dec. 21-23 at the Charles George Memorial Arena.  The Braves (4-3) took fourth place in the boys tournament which was won by the Owen Warhorses.

The Lady Braves had a big opening-round win over Clay Co. Tenn., 64-36. They followed that up with a win against Owen 76-45 in the second round.

In the championship game, on Friday, Dec. 23, the Lady Braves faced Georgia-powerhouse West Hall (Ga.) Lady Spartans.  Despite being down by 19 at one point in the second half, the Lady Braves fought back with three consecutive three-pointers in the last minute of the game by Pooh King, Tigger King, and Tori Teesateskie to pull to within 5 at the end (76-71). 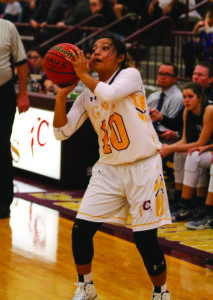 ALL-TOURNEY: Pooh King, Lady Braves senior point guard, pulls up for a three-point shot in the championship game. She was named to the All-Tournament team along with teammate Tori Teesateskie, sophomore guard.

“I thought we had some really nice moments,” Chris Mintz, Lady Braves head coach, said  of their tournament after Friday’s game.  “We dominated the second half of the first two games, and then we just played a really talented team and they had two girls get really hot on us.  But, we made a great comeback and never quit. We made it really close towards the end.”

He said the best part of Christmastime tournaments is being able to play high-level competition.  “It’s good to be able to play some teams from bigger schools and different areas that we’re not used to seeing.  I think it’s been really good for us.”

Coach Mintz said the tournament environment was good for his team. “We’re really young, and tonight was a big atmosphere, and those girls got to see and feel like what it’s going to be like come conference tournament and playoff time with packed gyms.”

The Braves went 1-2 on the tournament with an opening round 67-64 win over the Signal Mountain (Tenn.) Eagles.  On day two, the Braves were defeated by Owen in a high-scoring affair that saw the Warhorses take the win at 86-73.  On Friday, Dec. 23, in the third place game, Wallace-Rose Hill beat the Braves 84-63. 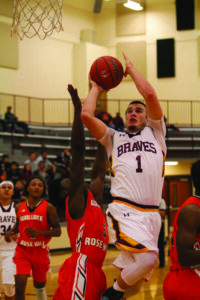 GOING UP: Tye Mintz (#1), Braves junior forward, goes up strong in the middle on a short jump shot in a game against Wallace-Rose Hill on Friday, Dec. 23.

Several of the key members of the Braves team just finished playing football and haven’t had much court time this year, a point Sonita Warren-Dixon, Braves first-year head coach, says will come.  “We’re still learning.  They’re trying to figure out me, and I’m trying to figure out personnel, and we’re just trying to get everyone on the same page.  We haven’t had enough practices to really prepare to get some of the things done that we need to get done so basically all of these games are pretty much like practices for us.”

She was happy with her team’s experience in the tournament and glad with the level of competition they faced.  “This was a good experience.  First of all, it exposes your weaknesses to know things that you’re going to have to work on.  It also lets you see personnel – everybody’s capability, who works well with each other. It’s just a measuring stick and all we can do is go forward from here.”

Coach Warren-Dixon added, “I told the guys this is not a reflection of who we’re going to be as a basketball team.  I wouldn’t want us to be peaking right now because then you’re going to burn out at the end so it’s a gradual process, and we’re going to be fine.”

Following are day one results from Wednesday, Dec. 21:

To view or purchase photos from the Lady Braves vs West Hall game, visit: https://onefeather.smugmug.com/SPORTS/BASKETBALL/LADY-BRAVES-201617/Vs-West-Hall-Ga-December-23/

To view or purchase photos from the Braves vs Wallace-Rose Hill game, visit: https://onefeather.smugmug.com/SPORTS/BASKETBALL/BRAVES-201617/Vs-Wallace-Rose-Hill-December/