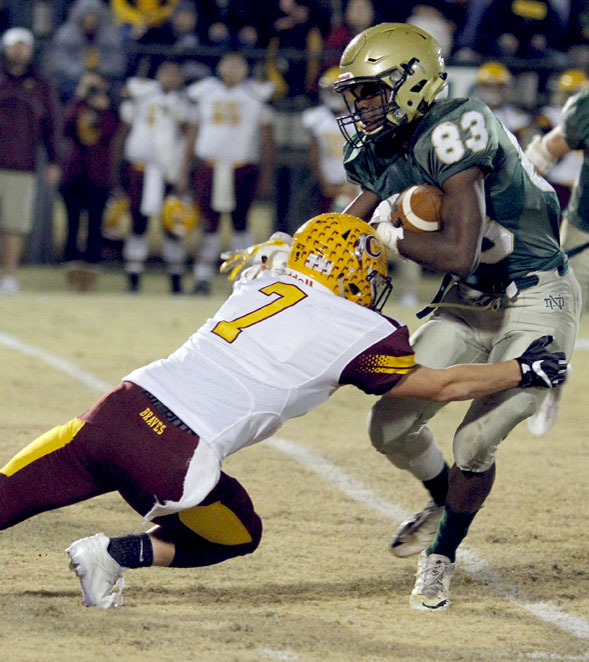 CALYPSO – The Cherokee Braves (9-4) won their sixth straight game of the season in dramatic fashion as they edged the North Duplin Rebels in the second round of the 1A state playoffs on Friday, Nov. 25.  Cherokee, led by Tye Mintz, junior quarterback who ran for two touchdowns, held off a North Duplin comeback to win the game 22-20.

Cherokee was led defensively by Gary Teesateskie with 16 tackles. He was followed by Byron Locust 13, Damion Blanton 11, Joaquin Layno 11, Will Davis 10, and Steven Meuse 6.

Following a scoreless first quarter, both teams got on the board in the second. Evans scored on a 26-yard run, but the point-after was no good and the Braves went into the locker room at halftime trailing 7-6. 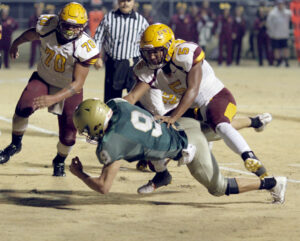 Mintz got both of his scores in the third quarter within 37 seconds of each other. He ran on touchdown runs of 1-yard and 13-yards, and the Braves converted on both 2-point conversions to make it 22-7 going into the fourth.

The Rebels tried to come back and Kenny Shepherd scored on a 2-yard run with 7 minutes left in the game. Four minutes later, Luke Britt ran into the end zone from three yards out following a blocked punt to make it 22-20.

The Rebels did get the ball back one more time, but Cherokee’s defense stopped them and the Rebels turned the ball over on downs to end the game.

The Braves travel to Mitchell on Friday, Dec. 2 at 7:30pm to take on the Mountaineers in the third round of the state playoffs.