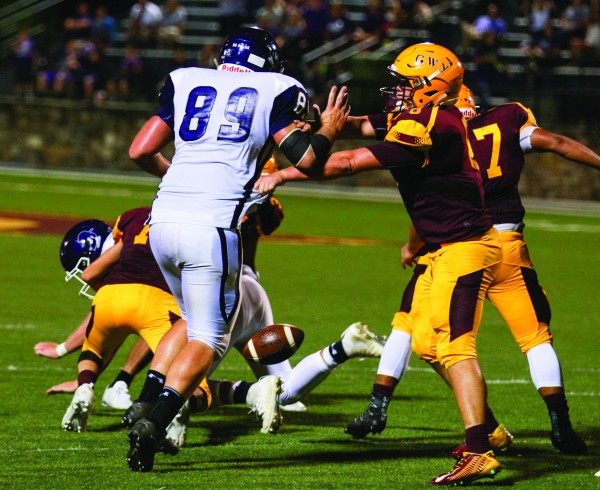 Cherokee’s Dodge Crowe-Moss (#8) strips Mitchell’s Alex McKinney of the ball. The ball was recovered by Mitchell, but Crowe-Moss did recover a fumble at the 4-yard line to end one of the Mountaineer drives in the first half. He ended the game with 10 tackles. (SCOTT MCKIE B.P./One Feather photos)

The Mitchell Mountaineers (2-0) spoiled Cherokee’s home opener on Friday, Aug. 26 with a 21-0 defeat of the Braves (1-1).  Mitchell scored one touchdown in each of the second, third, and fourth quarters to top the Braves in a mostly defensive struggle.

“We played really hard, and I’m really proud of the effort,” said Kent Briggs, Braves head coach.  “We made a lot of mistakes and gave them a lot of opportunities, and then we had opportunities where we sort of took ourselves out of it.  We’ve just got to get better mentally.  We’ve got to eliminate mistakes.”

Mitchell was led by Ben Young, junior quarterback, who completed 9 of 19 passes for 102 yards and one touchdown.  He also ran 12 times for 77 yards and a score. 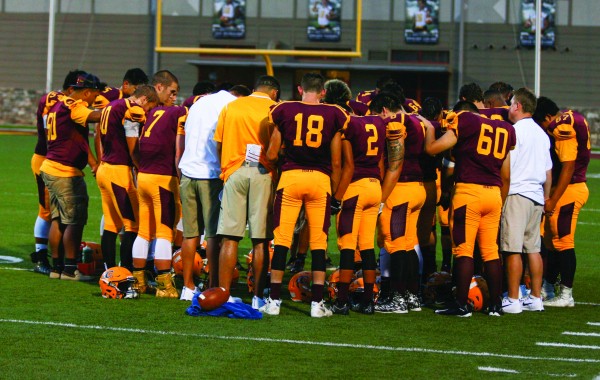 Cherokee players and coaches gather for a moment of prayer as a Braves player is taken off of the field following an injury. Out of respect for the privacy of student-athletes and their families, it is the policy of the One Feather to not identify those who have been injured during sports games. We send our sincerest thoughts and prayers to the young man and his family.

Mitchell got the ball first in this contest and kept it for most of the first quarter.  The Mountaineers ate up the clock as they drove down the field on a 16-play drive that started on their own 31-yard line.  The drive ended at the Cherokee 4-yard line as Young fumbled the ball which was scooped up by Crowe-Moss.

The Braves, starting at their own 4-yard line, put together a 13-play drive of their own that included three first downs in a row to start.  Following several penalties (holding, false start), the Braves found themselves in a 4th and 11.

They lined up for the punt with Swimmer back to receive the ball for the kick.  He faked the punt and took off around the left end for the first down to keep the drive alive.  On the next play, Mintz would receive a monster block from Toineeta which sprang him around that same left end for a 22-yard gain down to the Mitchell 22-yard line.

But, the drive ended on the next play as Mitchell’s Ben Robinson would intercept a Mintz pass at the Mitchell 18-yard line.  The Mountaineers were unable to move the ball and were forced to punt to Cherokee who would end up punting after a short, six-play drive.

Mitchell’s third possession started at their own 30-yard line.  Eight plays later, Young connected with Brody Smith on a 25-yard touchdown pass.  The extra point was blocked by Crowe-Moss and Mitchell led 6-0 with 8.9 seconds left in the half. 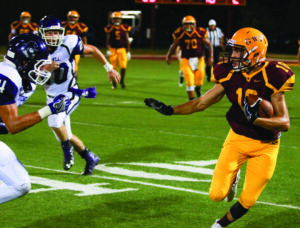 Cherokee took a knee on their next possession and the half would end with Mitchell up 6-0.

The Braves got the ball back first in the third quarter, but they weren’t able to move the ball and were forced to punt.

The Mountaineers set up shop at their own 14-yard line following the punt and put together a six-play drive that culminated in a 39-yard touchdown run by Young.  The two-point conversion was good as Young hit Noah Pitman on a pass play to make it 14-0 Mitchell with 5:45 left in the third.

Cherokee turned the ball over on downs on their next possession followed by a punt from both teams.

Mitchell started their sixth possession of the game at their own 38-yard line at the beginning of the fourth quarter.  They would put together a 15-play drive that took seven minutes off the clock and ended with a 4-yard touchdown run by Matthew Buchanan.  Luis Velazquez added the extra point and Mitchell led 21-0 with just under five minutes left in the contest.

After starting in good field position at their own 41-yard line, Cherokee drove down the field on an eight-play drive.  But, they weren’t able to punch it in and Brody Smith intercepted a Mintz pass in the end zone with just over two minutes left.

The Mountaineers were able to run out the clock to seal the win.

The Braves host the Choctaw Central (Miss.) Warriors (0-2) in the annual Battle of the Nations game at Ray Kinsland Stadium on Friday, Sept. 2.  The Warriors are coming off two large losses including Union (Miss.) 30-0 and Heidelberg (Miss.) 42-8.

Coach Briggs said his team will work this week on all facets of the game.  “Right now, we just have to stay composed.  When the pressure’s on, we just have to do a good job of making sure that we’re not jumping offsides and giving them too many opportunities.  We’ve just got to get smarter as a football team.  A lot of times, that takes experience and we’re just going to keep doing it until we get it right.”

(Note: Defensive statistics were compiled by One Feather staff at the game.)

To view or purchase photos from this game, visit: https://onefeather.smugmug.com/SPORTS/FOOTBALL/BRAVES-FOOTBALL-2016/Vs-Mitchell-August-26/