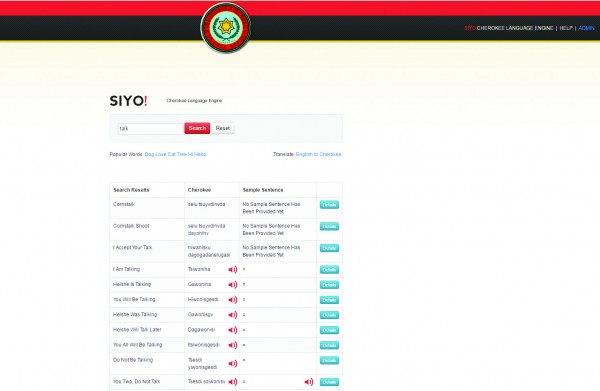 A screen shot of a new Cherokee Language searchable database site (www.siyo.brokentrap.com) shows a search for the word talk.

Cherokee Language dictionaries have been around for years, but a new website will help those who wish to put those words into use or need help with tricky verb conjugations.  The site (www.siyo.brokentrap.com), which has been developed by staff at New Kituwah Academy, contains over 7,000 words and includes phonetic spellings as well as sentence examples and vocal recordings for correct pronunciation.

“We’ve always had an internal digital archive, but what we were lacking was a digital search database for all of the work that the Cherokee Language Consortium has done,” Renissa McLaughlin, New Kituwah Academy manager, said of the site which was developed through a grant from the Cherokee Preservation Foundation.

During the three year project, first Cherokee speakers (i.e. those who spoke the Cherokee language as their first language) have been used to help with not only the pronunciation recordings but also with cultural explanations of the words themselves.

“This database reflects more accurately the complexity of the language as much as we possibly can,” McLaughlin commented.

She said the need for this database is more pressing now than ever before.

“What we’re doing now is what a lot of tribes have already done and that’s to archive the language.  For some tribes, an archive is all that they have left.  So, you always have to prepare for the worst, and this is preparation for the worst.”

McLaughlin said the database itself is an ongoing project and is a “living, breathing” work rather than an “old, dusty archive”.

McLaughlin said the work on this expansive database has been done with staff whose jobs are not solely to work on this project.  “I have to pat everybody on the back.  We’re doing this with staff that have a lot of other things to do.”

“An archive requires constant maintenance.  It will crash.”

She told of such a crash a few months ago where nearly 2,000 words were lost and had to be reentered.  “It’s kind of piecemealed together, but considering how large it is, I think we’ve done pretty good.  We do a lot with a little.”

The in-depth nature of the database and the current environment surrounding Cherokee Language studies is one of wanting to know more commented McLaughlin.  “One of the things of this language process, the revitalization, is that before people would just take things and translations at face value, but now, the speakers have really taken ownership in the correctness of the language.  There is a level of pride in that they are actually esteemed elders – they are an authority in their knowledge.”

She added, “They have lifted themselves up to that point, and that’s exactly where we wanted them to be when we set those goals – that they would be raised up and be seen as esteemed elders and unique.”

“We have to get as much knowledge as we can for as long as we can, and the enunciations, the inflections, all of that has to be perfect.”

Lossiah said the legacy of the database will be the preservation of the language.  “We don’t just want it for a few people.  We want it for all Cherokee people.”

In other language news, the first annual Honor Our Cherokee Speakers Walk will be held on Monday, April 18 at 10:30am.  Everyone is invited to the walk which will start at the KFC parking lot in Cherokee and travel to the Cherokee Indian Fairgrounds.

The New Kituwah Academy will also be hosting Dr. Durbin Feeling, a first Cherokee Language speaker and author of “Cherokee-English Dictionary”, for an Advanced Cherokee Grammar session from June 22-24.  This event will be open to the public and will culminate with the annual Kituwah Celebration on Friday, June 24.