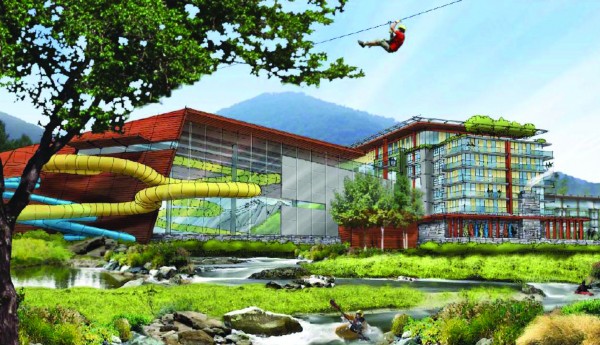 The image above is a rendering of the proposed Cherokee Adventure Park. (Images courtesy of Iconica)

In September 2012, Tribal Council approved plans for a $92 million adventure park resort.  Due to other projects, including the new Cherokee Indian Hospital, that plan got derailed.

Now, almost four years later, the idea of an adventure park is back on the table.

“It’s an idea that still floats around,” Principal Chief Patrick Lambert stated prior to a presentation from Tom Pientka, chief executive officer of Iconica, to Tribal Council on Wednesday, March 23.  “I think it’s something that is very intriguing in concept and idea.”

Iconica is a business development firm that has worked on projects across the country including several in the Wisonsin Dells area such as the Great Wolf Lodge and the Kalahari Resort. 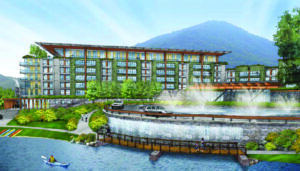 Pientka started Wednesday’s meeting by discussing several locations for the park which would include a water park, around 300 hotel rooms, whitewater simulators, rock climbing, ziplines and more.

The first site is catty-corner to the casino and the second site is the old Cherokee Elementary School grounds.  “Either site can work.  It’s really just a matter of where you guys want it.”

He then discussed market analysis that was completed previously by the Lococo Company who looked at several factors for the project including: location, competition, population and demographics.  “The goal is to put heads in beds,” said Pientka who related that the minimum stay for success should be at least two days.  “Cherokee is viewed as a pass-through market now…it’s not a high overnight stay destination.  So, we need to create one, and this is one of those possibilities.” 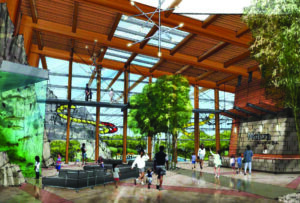 It was decided during the presentation that a detailed plan, complete with financing proposals, was needed and should be submitted to Tribal Council for consideration.  An exact time frame for this was not discussed.

Pientka said it would take around two-and-a-half years to open once the designs are set and the finances are arranged and the business would employ around 300-350 employees (150 full-time).

He related that branding the project is easy.  “We believe that Cherokee culture is the brand, and we’d built around that.  It’s the reason people come here.”

Several Tribal Council representatives expressed their support of the project.

Birdtown Rep. Travis Smith commented, “I think it’s time to move on something of this nature.  We can sit back and talk about it for another two to six years, but it’s not going to do us any good.”

Cherokee County – Snowbird Rep. Adam Wachacha concurred and added, “We know that we have threats on our doorsteps, and we need to start diversifying our revenue away from just gaming.” 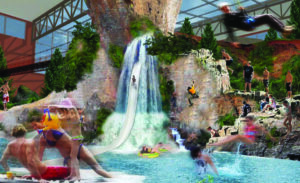 He said either location was fine with him and noted that he would like to see a good financing plan as well as an aggressive payback strategy for the loans associated with the project.  “I like the idea that it is going to be more Cherokee-themed.  That’s what this town needs.  Eco-tourism is the way that a lot of towns are going towards, and I would hope that this is what Cherokee would push more towards.  I like the project, I really do.”

Yellowhill Rep. B. Ensley said he has worked with people on this idea for nearly 12 years and is in full support of the project.  “I think we need to move forward on this project.  It’s going to take two-and-a-half years to get it on the ground so we need to put it on the fast-track and see if we can’t bring some families to Cherokee…this would be our wow factor.”

Cameron Cooper, EBCI retail development specialist, said, “This is that number-one ticket item that could potentially bring people back to Cherokee for a family destination.”

He said it would help provide a different revenue stream than the casino, “If we want to see our programs grow and continue to provide for our people, we have to have revenue.  It takes money to spend money folks.”