You could tell from the moment they took the court for warm-ups that the boys West vs. Midwest All-Star game was going to be a fun one.  After shooting around for a little bit, one of the boys tried a dunk which sparked an impromptu dunk show/contest between the two All-Star squads.

It was impressive.  It was fun to watch.  And, it was markedly different than anything I’d seen on a basketball court all season long.   It was amazing to watch players from different teams getting along and having fun playing a sport they love.

The West vs. Midwest All-Star games (boys and girls) were held on Saturday, March 19 at the Charles George Memorial Arena.  That same night, the annual Blue-White All-Star games were held at Enka High School.

The atmosphere at the West vs. Midwest games was relaxed and fun – there goes that word again.  I’d dare say 95 percent of the crowd was into the spirit of the game and what it stood for which was basically a group of outstanding players from various teams coming together in a pick-up style game for the sake of playing ball – nothing else, no titles or trophies on the line. 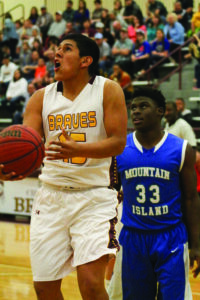 You still had a very small percentage of fans present that seemed to miss that spirit and took it way too seriously, but those are the same people who probably get intensely irate when playing miniature golf so we’ll dismiss them in our conversation.

Personally, I wish basketball could be like this all the time.  I’d wager that we’d see a higher level of play because players, especially high school-age players, respond better when the pressure is off and they can just shoot the ball – or dunk the ball which is always cool.

Dominique Wilkins, retired Atlanta Hawks superstar, was a 9-time NBA All-Star and a two-time NBA Slam Dunk Contest champion (1985 and 1990).  He was once quoted as saying, “People came to the All-Star game to see the dunk contest.”

He might be right, and if so, that’s awesome.

People go to basketball games to have fun, or at least they should.  If the players aren’t under as much pressure, they’re having fun which, in turn, allows the fans to have more fun which equals an entire gym of people having fun.

Wouldn’t that be a neat change from what a lot of fans, players, coaches and referees encountered all over the state this past year?

Don’t get me wrong, I’m not saying teams and players shouldn’t be competitive.  I’m just saying the atmosphere that many players had to go into this past season was way too contentious for anyone – much less teenage kids.

It’d be nice to see things revert back to fans cheering their team on rather than heckling the other team or the refs, and it’d be nice to see players relaxed on the court just like they are shooting hoops in their backyard.  Maybe that lesson alone can be learned from these All-Star games.