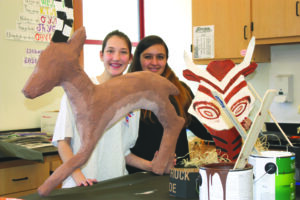 Makayla Trantham and Maiya Davis are shown with a few of the props they have been working on for the Musical Theater Department’s upcoming production of the Lion King Jr. (Photo contributed)

The Musial Theater Department at Cherokee High School and Middle Schools has cast the characters for their production of the Lion King Jr.  which will take the stage at the Chief Joyce Dugan Cultural Center on May 5-7 at 7pm.

Tickets go on sale at the Middle School and High School front office for $5 a seat for general seating beginning Monday, April 11. The Braves Cafe will offer dinner served in the lobby for $7 starting at 5:30 nightly (Dinner and a musical for only $12).