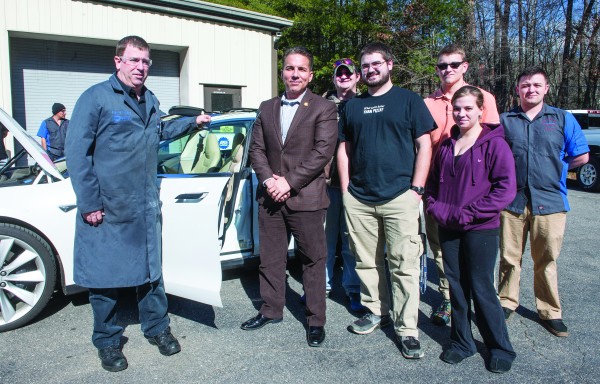 SYLVA – Long before he became Vice Chief for the Eastern Band of Cherokee Indians, Richard Sneed was working with young people.

He served as an instructor at Cherokee High School for more than 11 years, and he was pastor at Christ Fellowship Church in Cherokee for 14 years.

So when he learned of the opportunity to continue helping the younger generation through a new program at Southwestern Community College, the Vice Chief did not hesitate. He is among the first group of mentors in SCC’s Native American MENtoring program, which was launched in December.

“As an educator and a pastor, I have seen firsthand the impact that having a mentor has in the life of a young person,” Vice Chief Sneed said. “I also recognize the negative effects that arise when there is a lack of guidance in young people’s lives.  Because I want our Cherokee young men to succeed, I felt that it was important that I be involved in the process.”

Before taking his Tesla car over to the college’s automotive systems technology program for students to observe, he had agreed to serve as a mentor.

“Our focus with the Native American MENtoring program is squarely on helping a segment of the population that has historically struggled to stay in college through graduation,” Dixon said. “With the help of men like our Vice Chief, we can make great strides toward reversing that trend.”

While new to the mentoring program, Vice Chief Sneed has long been an advocate for SCC.

“I have always encouraged our students to explore the community college route,” he said. “It is my sincerely held belief that SCC helps students get started on the right path while pursuing their higher education goals. SCC is the launching pad to a successful career.”