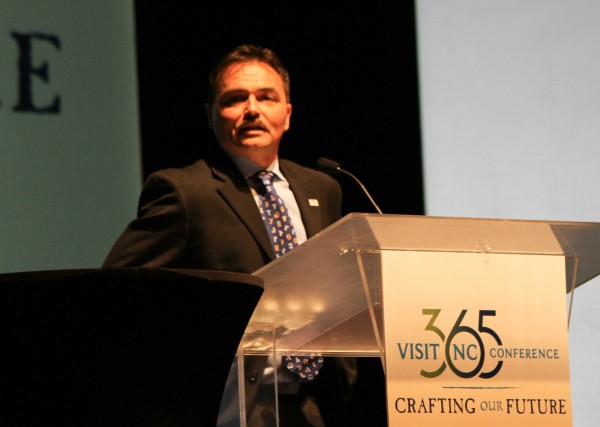 Once deemed the annual Governor’s Conference on Tourism, the 2016 Visit NC 365 Conference was held in Harrah’s Cherokee Casino Resort from March 13-15. The meeting is touted as “the most comprehensive summit of our state’s travel and tourism industry” by Governor Pat McCrory.

The agenda began with a prayer presented by Bo Taylor, director of the Museum of the Cherokee Indian. Taylor, dressed in 18th Century Cherokee period dress, spoke and sung the prayer in his ancestral language, Cherokee. 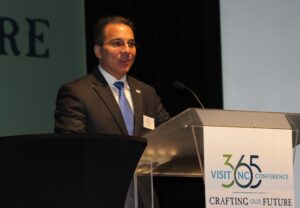 Ray Rose, Tribal Casino Gaming Enterprise (TCGE) board, and Lee Ann Bridges, regional vice president of marketing for Harrah’s, welcomed the participants and vendors to the property. Rose commented that he felt that casino operations and tourism industry had very much in common. Bridges thanked the organizers for selecting the property for the event.

Vice Chief Rich Sneed addressed the crowd of about 200 North Carolina tourism professionals, speaking of the great tradition of welcoming and entertaining visitors to Cherokee lands. He cited the Cherokee Indian Fair as one of the examples of the many events that the Cherokee Destination Marketing program has developed and executed, keeping the traditions and heritage of Cherokee alive.

Principal Chief Patrick Lambert welcomed the tourism and marketing experts to Cherokee and spoke of his passion for putting Cherokee people first. He introduced Mickey Duvall, the Eastern Band of Cherokee Nation’s Secretary of Commerce and staff. Chief Lambert related the importance of tourism to the overall economy and success of the tribe. He told the audience that he is working on initiatives to further enhance the great visitor offerings already in place. He spoke on a redesign of the downtown that would make the area more inviting to those visiting Cherokee. He also stressed the importance of interconnectivity of the different areas of Cherokee, saying that connecting greenways and walking paths are a priority. He also shared some statistics from the destination marketing efforts of the tribe.