Native Program at School for the Deaf to honor Crowe

The late Charles Albert “Inky” Crowe was an outstanding athlete who never was able to hear the applause of his many fans.  The EBCI tribal member attended the North Carolina School for the Deaf (NCSD) where he excelled at sports, especially football, becoming a two-time Deaf All-American halfback.  He later went on to become a coach at the school where he was beloved by staff and students.

David Bird, NCSD social studies teacher, addressed Tribal Council during its regular meeting on Thursday, March 3 seeking support, in the form of a resolution, from the Eastern Band of Cherokee Indians for the program. 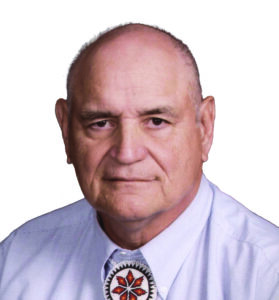 The North Carolina School for the Deaf is planning a Native American Program this summer in honor of the late Charles Albert “Inky” Crowe, an EBCI tribal member who was a legendary athlete and coach at the school. (Photo courtesy of Crowe family)

“The whole point of the program is to honor Mr. Charles Crowe who was a legend himself,” Bird told Council through an interpreter.  “He played football at the North Carolina School for the Deaf, and one of the years when he played, NCSD actually made it to the state championship game.  They almost won, but narrowly lost by a score of 13-12.”

Crowe was a 1963 graduate of NCSD.  “He worked as well at NCSD for many years,” said Bird.  “Some of his work included coaching football and wrestling, and after his retirement from NCSD, he continued to come to campus to support sporting events…he was always supportive of the students and staff, and he was part of our deaf family as well.”

The summer program will feature daily sessions for students in the areas of American Indian music, dance, art, food, and other skills such as fire-building and wigwam construction.  Guest speakers and demonstrators from the Tribe are expected, and the students in the program will take field trips to various places including the Museum of Cherokee Indian, Oconaluftee Indian Village, and the Joara archaeological site in Morganton.

“This is wonderful,” said Big Cove Rep. Teresa McCoy.  “It’s an honor for the Crowe family.”

She proposed an amendment to the resolution that money, the amount to be determined at a later date, from Tribal Council’s public relations line be used to help fund the program.  “This money is probably going to be used for our people to go over to Morganton and teach.”

Principal Chief Patrick Lambert agreed to match an amount spent by Tribal Council out of his Executive Office budget.

Mary Crowe, an EBCI tribal member and relative of Charles Crowe, submitted the resolution and commented, “Inky meant a lot to the school.  You guys really don’t know what he meant to the community at the North Carolina School for the Deaf.”

She related she has spoken with EBCI royalty members as well as Chief Lambert in an effort to get them to visit the school during the program.

The North Carolina School for the Deaf was established in 1894 and currently served 75 deaf and hard-of-hearing students from western North Carolina.  Students live and learn in a bilingual community which includes English and American Sign Language.