Young EBCI tribal members receive a sizable amount when their Minor’s Fund distribution is dispersed to them from the Eastern Band of Cherokee Indians.  Some have complained over the years that the tax burden on large lump sum payments is too large, and in recent years several proposals for staggered distributions have been put forth for consideration.

Tribal Council held a work session on Wednesday, March 2 to discuss Tabled Ord. No. 38 (2015) Ord.-38-2015 which calls for a staggered distribution and also to discuss three possible scenarios for such distributions.

“We took the last Minor’s distribution and then projected that for the next few years and then also projected what their tax payments would be if they received a lump sum distribution,” said Jacob Reed, EBCI Investment Committee, who gave a PowerPoint Presentation during the session.  “We then took that and broke it into three different scenarios.”

Following is a breakdown of the scenarios using the amounts Reed outlined in his presentation:

“Each one of those has different impacts as to total revenues coming to an individual as well as, perhaps more importantly, the tax consequences of each one which is one of the things that we all recognize as being a real problem for kids today being hit with such a big tax bill,” said Principal Chief Patrick Lambert.

He added, “I want to make sure that everyone understands that these are just options…I’m not stuck on any one particular plan.  I think any changes that we could make would be a benefit and a help.”

He advocated for more financial education for the youth and is proposing that a personal finance course be added as a requirement for graduation from Cherokee High School.  “Having worked in the school system for 12 years, I know very few students who were successful with their money.”

The idea for staggered payments was originally brought up several years ago by members of the Junaluska Leadership Council (JLC).  This past fall, the JLC hosted Meet the Candidate events for those running for tribal office and one of the questions posed was, “What are your thoughts on staggered payments of the Minor’s Fund Distribution?”

Bradley Parker, JLC member, said on Wednesday that most in the group agree on Scenario 3.  “We believe that, in Scenario 2, going to 30 would be too long to receive their money because at about 21 or 25, if they go to college, they’ll be getting out and looking for a job and a home and this would help…”

Polly Castorena, EBCI Investment Committee chairperson, related that a decision on one plan has to be made and that according to law on the Minor’s Trust offering numerous options is not a possibility.  “In the Trust document, the way the document reads, it’s all or none.  Unfortunately, there’s not options for children to decide.”

“The Investment Committee is making the recommendation and supporting the staggering of distributions from a financial standpoint.”

Big Cove Rep. Teresa McCoy said she recently spoke with two of her constituents.  “They’re thinking was when their children turn 18, they’ll decide, at that time, what they want to do with their money.  The father even made the comment that ‘when we get our distributions in June and December, they don’t come to us over several months in payments, they come to us in one lump sum twice a year.’”

She also advocated for providing as much financial education as possible and implored that the decision be left up to the individual receiving the money.  “Some of the kids want to take their checks and do whatever they want to with them, and two weeks later, they won’t have a dime.  Others will possibly invest theirs while they’re going to school because we cover their education.  Others will graduate with children, and those children need a home…”

Big Cove Rep. Richard French agreed, “I understand that we have to look out for these kids.  We also have to step back and talk to these kids and give them all the education that we can give them on this money.”

He stressed the need to start education early.  “Let’s not wait until they’re juniors or seniors.  Let’s start in middle school.  Let’s start letting them know what’s coming when they hit 18.  Get them prepared for all of this money because it’s growing.”

Tribal Council Chairman Bill Taylor praised the efforts of the Junaluska Leadership Council on this issue.  “They were really the pioneers of this whole thing.”

He said he agrees with the staggered payments, “It’s going to benefit kids in the long run.”

The legislation currently remains tabled.  Agendas for April’s Budget Council and Tribal Council session have not been finalized yet. 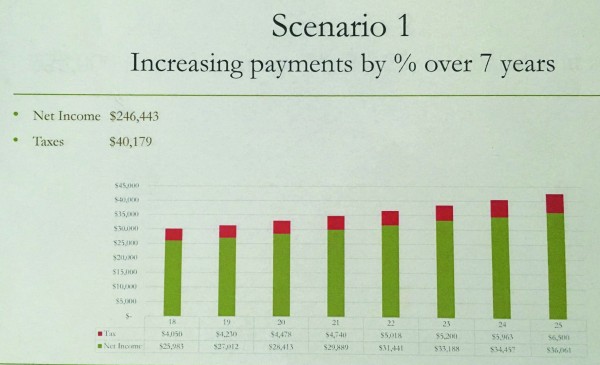 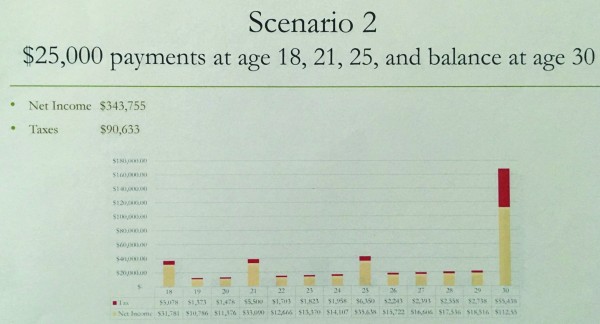 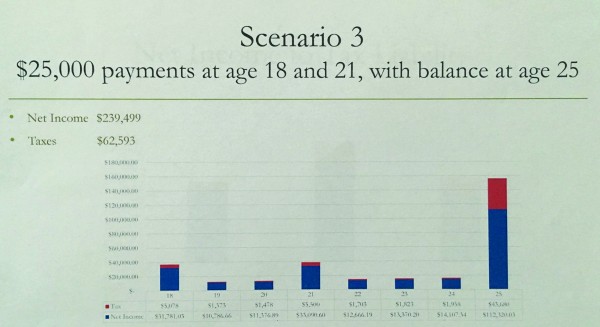