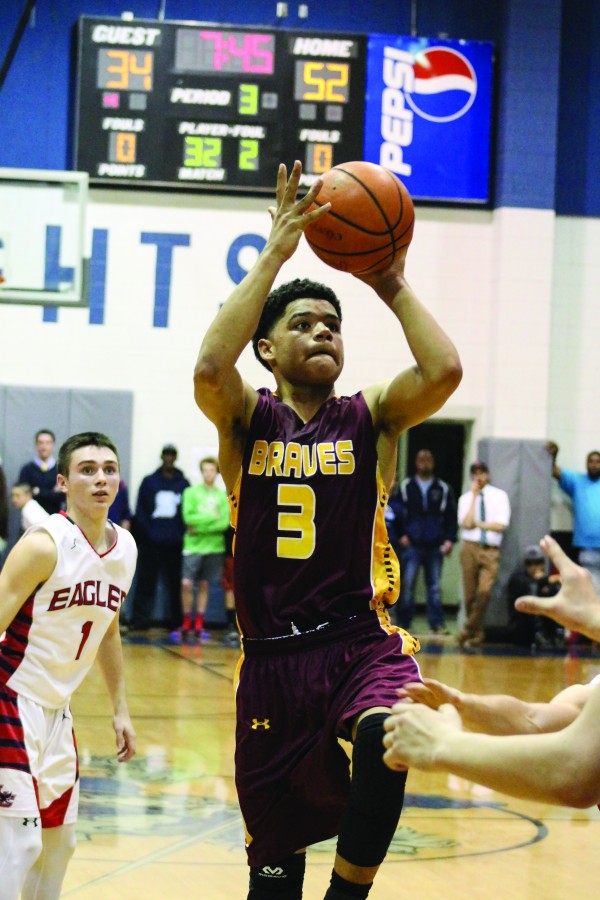 Cherokee’s Justus Day (#3), sophomore forward, goes for a short jumper at the beginning of the third period in Tuesday’s regional semifinal game against Lincoln Charter. He led Cherokee on the night with 28 points, 5 assists, 1 rebound and 1 block. (SCOTT MCKIE B.P./One Feather photos)

LINCOLNTON – The Cherokee Braves (25-4) ended their season in a fast-paced, high-scoring game against the Lincoln Charter Eagles (29-3) in the 1A West Regional semifinals on Tuesday, March 1.  After trailing by as many as 24 points in the third period, the Braves came back to within six points by the fourth, but couldn’t close the gap entirely as the Eagles topped them 101-88 in a game played at North Lincoln High School due to the size of the expected crowd.

Justus Day, Braves sophomore forward, led Cherokee with 28 points, 5 assists, 1 rebound and 1 block.  He was followed by senior point guard Jason McMillan, playing in his last game as a Brave, with 20 pts, 2 assists, 1 reb and 4 steals.

“The boys I love with all of my heart are hurting right now, and I can’t do anything to change that,” Willis Tullos, Braves head coach, said after the game.  “We’ll think about a great season once this quits hurting so bad.  My kids fought as hard as they could fight.  They gave it all they had, and I can’t ask for any more than that.” 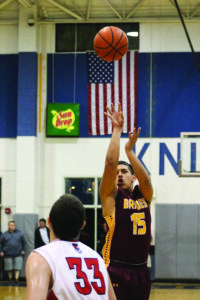 The game started quickly with both teams hitting shots early.  Cherokee took an 8-5 lead just two minutes in.  The Eagles tied it up at 11-11 midway through the first period.  From that point, Lincoln Charter went on a 14-4 run to take a 10-point (25-15) lead with 1:34 left in the first.  The remainder of the period was just about even, and the Eagles led 29-20 after one.

Lincoln Charter outscored Cherokee 23-14 in the second period and took an 18-point (52-34) lead into the locker room.

The first few minutes of the third were just about even and the Eagles led 62-42 at the 5:00 mark.  From that point, Cherokee went on a 10-4 run to cut the lead to 66-52 with just less than two minutes left in the period.

The Braves outscored Lincoln Charter 7-2 in the next two minutes to trail 68-59 as time ticked down on the third.  With time running out, McMillan got the ball, took two steps over the half-court line and shot just before the buzzer…swoosh!  The Braves trailed by six (68-62) going into the final eight.

As the game winded down, Cherokee was forced to foul and the Eagles were able to hold on for the 101-88 win.

Full stats were not available for Lincoln Charter.

To view or purchase photos from this game, visit: https://onefeather.smugmug.com/SPORTS/BASKETBALL/BRAVES-BASKETBALL-201516/At-Lincoln-Charter-1A-West/i-GxVRJqh