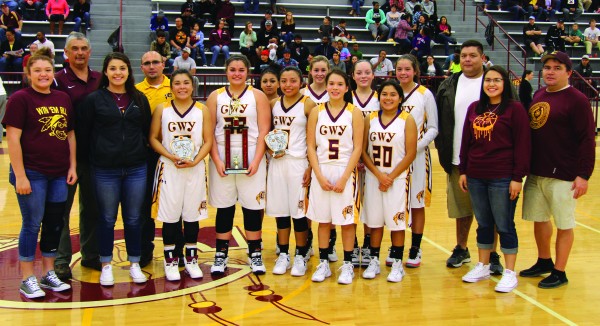 The Cherokee Lady Braves (8-3) took second place at the Holidays on the Hardwood Tournament held Dec. 21-23 at the Charles George Memorial Arena.  After defeating Owen (85-58) and Asheville (75-51) in the first two rounds, Cherokee was defeated by the undefeated Erwin Lady Warriors 71-59 in the finals.

“I thought we played well throughout the whole tournament,” said Chris Mintz, Lady Braves head coach.  “That team we played in the championship is a really, really good team.  They had four starters back from a team that went 26-4 last year.  They have three college-level players, and they looked like it.  We played hard.  We just made too many mistakes in the championship, and you can’t beat good teams like that.” 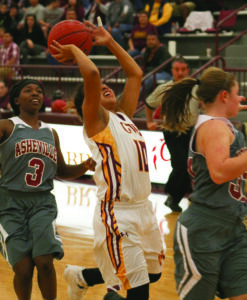 Cherokee’s Pooh King goes up for a shot between two Asheville players in the second round of the Holidays on the Hardwood Tournament. King, who was named to the All-Tournament team, scored 49 points in the tournament including 24 in the finals.

For the tournament, King had 49 points including 24 in the final.  Wolfe had 36 points and Stamper had 30.

The first period of the final was close with the game being tied in the early minutes.  Erwin went on a run late in the first and led 25-17 after the first eight.  They extended their lead in the latter part of the second period as well and took a 42-31 lead into the locker room.

Erwin outscored the Lady Braves 9-2 in the first few minutes of the third period and led 55-36 after three.  The fourth period was almost a dead heat, and the Lady Warriors took the championship 71-59.

Coach Mintz said he was happy with the experience his team got in the tournament.  “It’s always good to play teams like that that challenge us so we can find out what we’re not very good at.”

The next night, Cherokee’s shooting hands were still hot as they had three players in double digits including Tori Teesateskie 15, Stamper 10 and Wolfe 15.  The Lady Braves led by 23 at one point in the second period and by as many as 29 in the third as they cruised to a 71-51 win. 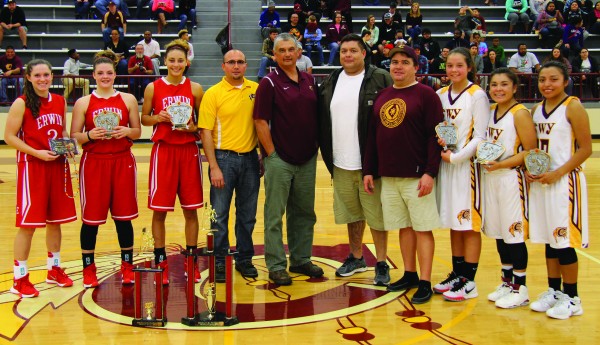 Full tournament results by round:

To view or purchase photos from the tournament, visit these galleries: