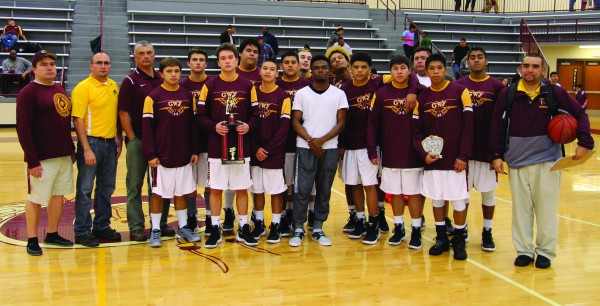 The Braves took second place in the Holidays on the Hardwood Tournament on Dec. 21-23 at the Charles George Memorial Arena. (SCOTT MCKIE B.P./One Feather photos)

The Cherokee Braves (8-3) averaged 94 points per game as they took second place at the Holidays on the Hardwood Tournament held Dec. 21-23 at the Charles George Memorial Arena.  After defeating Cosby (Tenn.) 106-80 and Asheville 84-78 in the first two rounds, they lost to the Greenville (SC) Red Raiders 101-92 in a foul-ridden final.

“I thought we did a great job throughout the tournament,” Willis Tullos, Braves head coach, said after the final game on Wednesday.  “We played a really good basketball team tonight.  A lot of things happened, and the referees let it get out of hand.  But, my kids didn’t back down.  We didn’t run from nobody, and I’m proud of them.”

Coach Tullos said his team gained confidence in the tournament.  “We beat a really good team in Asheville, and Cosby wasn’t a bad team either.  We lost to a team tonight…our enrollment is 278 and theirs is 1,643 so we feel like we can play with anybody.” 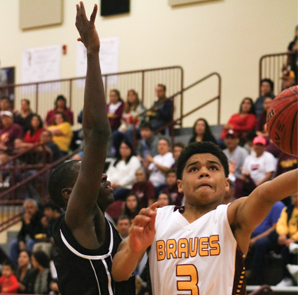 Cherokee’s Justus Day goes for a shot against Asheville in the second round of the tournament. He led Cherokee with 84 points in the tournament and was named to the All-Tournament team.

In the final, a total of five Braves fouled out in a game that wasn’t decided until the final minute.  After trailing by as many as 15 points in the second period, Cherokee came back and tied the game (51-51) a couple of minutes into the third.  The score went back and forth and the Braves kept the game to within two or three points until late in the game when their starters began fouling out and the Red Raiders took the championship 101-92.

The night before, Cherokee played a strong Asheville team in a game that also wasn’t decided until the final minute.  Day led the Braves with 27 points followed by McMillan 23 and Holden Straughan 11.  The first two periods were just about even.  Asheville led 18-16 after the first period, and after a tough second period for both squads, McMillan hit a three-point shot at the buzzer to tie the game at 39-39 at halftime.

Both teams lit it up in the third period, but the Braves outscored Asheville by four to take a 61-57 lead into the final eight minutes.  It was back and forth for the final period, but Cherokee held its composure and Holden Straughan, Day and Mintz hit key free throws in the final 28 seconds to seal the 84-78 victory.

The Braves got a good start in this tournament with a big 106-80 win over the Cosby (Tenn.) Eagles) on Monday, Dec. 21.  McMillan (31) and Day (20) combined for almost half of Cherokee’s points as the Braves broke the century mark. 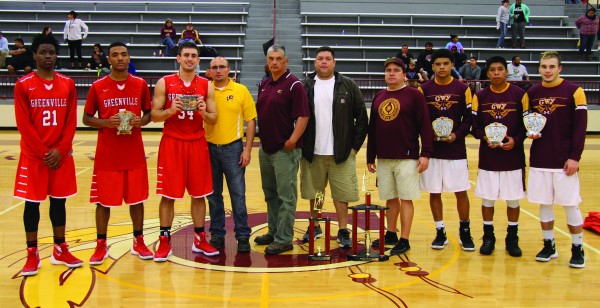 Full tournament results by round:

To view or purchase photos from these games, visit: