BASKETBALL: Braves spread ball around in big win over Bulldogs 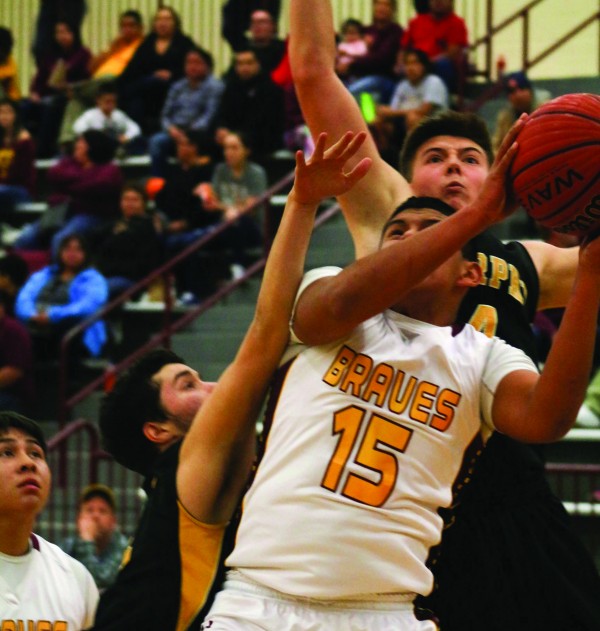 Four Cherokee (6-2) players were in double digits and a total of 12 players scored in a blowout 90-27 home win over the visiting Murphy Bulldogs on Friday, Dec. 8.  Cherokee was led by Steven Straughan, senior forward, and Justus Day, sophomore forward, with 13 points apiece.  Also in double digits were Jason McMillan, senior forward, and Josiah Lossiah, freshman point guard, with 11 each.

“The kids played good defense,” Willis Tullos, Braves head coach, said after the game.  “We didn’t shoot the ball really well, but we shot it well enough to win.  Murphy is weak, and I’m sure they’ll get better.  They’ll be ready for us when we come down there, and we’ll be ready for them too.”

Cherokee had 19 steals on the night including 5 by Day and 4 by Kennan Panther, senior forward.  Isaiah Evans, freshman forward, led the team with 9 rebounds followed by Day with 5.

Cherokee came out running on all cylinders and took an early 8-2 lead not even two minutes into the game.  The Braves led 18-10 at the 2:03 mark of the first period and were able to extend it to 25-13 going into the second. 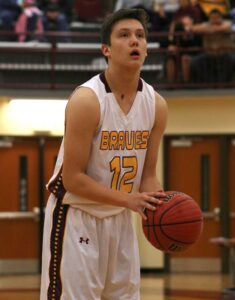 Steven Straughan (#12), Braves senior forward, lines up a free throw. He finished with 13 points, 2 blocks and a steal.

Cherokee’s defense tightened up in the second period, and the Braves went on a 14-0 run in the first four minutes to take a 39-13 lead.  The Bulldogs finally got on the board in the period with 3:27 left before the half as Hayden Hughes knocked down two free throws.  From that point, Cherokee outscored Murphy 10-6 to take a 49-21 lead into the locker room. 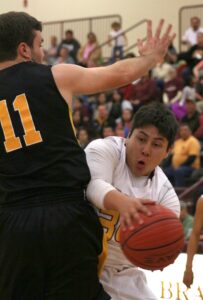 Logan Teesateskie, Braves senior forward, sneaks a pass behind the back of Murphy’s Hayden Hughes (#11).

Murphy only scored six points the remainder of the game.  Cherokee held the Bulldogs to one point in the third period and five in the fourth.  At the 5:37 mark of the third period, Isaiah Evans, Braves freshman forward, hit a three-point shot from the left corner.  Lossiah stole the ensuing inbounds pass and put it back up for a quick two points to put Cherokee up by 40 (61-21) thereby invoking the NCHSAA mercy rule.

Murphy was led by Hagan Newton with 9 points and Ethan Sneed and Thomas Day with 5 each.

To view or purchase photos from this game, visit: https://onefeather.smugmug.com/SPORTS/BASKETBALL/BRAVES-BASKETBALL-201516/Vs-Murphy-December-18/