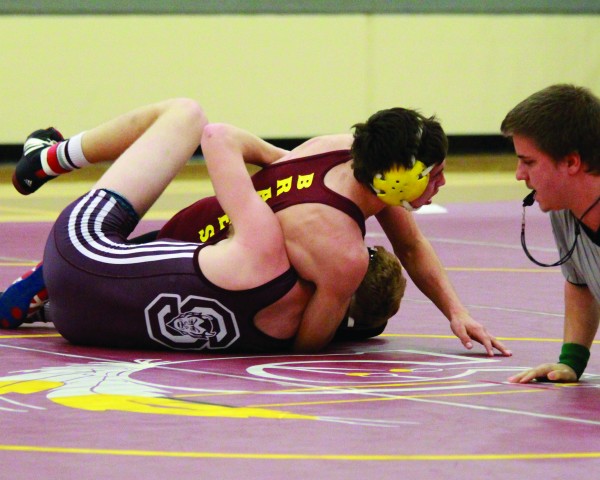 Cherokee’s Anthony Toineeta (top) works for a pin, which he got a few moments later, in a match against Swain’s Dawson Lowe on Tuesday, Dec. 15. (AMBLE SMOKER/One Feather)

The Cherokee Braves wrestling team fell to the Swain County Maroon Devils by a team score of 54-22 in a home meet on Tuesday, Dec. 15. Cherokee’s Anthony Toineeta, Luke Woodard, and Sam Sneed won their match via pin while Seth Sneed won by decision 8-4. The Maroon Devils picked up five victories by pin fall and four matches by forfeit.

“Everybody’s improving every day,” said Cherokee Head Coach Tavi Rivera.  “I’m proud of them, and I wish the score was a little different, but we’re missing a lot of weight classes.  Anthony (Toineeta) did real well.  He’s getting a lot better.  Luke (Woodard) is doing real well.  He’s a really competitive wrestler.  He helps us out a lot when it comes to points for the team.  Both are real good guys, and that’s why I chose them to be our captains because they both know how to lead the team.”

The following is a rundown of the matches from the evening:

After the match, Coach Rivera said, “Anybody out there looking to better themselves and get in better shape, just become all around better, come out and wrestle.  Give it a try.  Even if they don’t play sports, we’re always looking somebody that’s ready to work, ready to learn, and ready to win.

The Cherokee Braves wrestling team will travel to Robbinsville High School on Friday, Dec. 18 for their next conference match.  They will then travel to Dawsonville, Ga. on Dec. 21-22 for the Dawson County Tournament before returning home to Cherokee for the Osley B. Saunooke Invitational on Jan. 2.

To view or purchase photos from this match, visit: https://onefeather.smugmug.com/SPORTS/WRESTLING/BRAVES-201516/Vs-Swain-December-15/i-x69Pg2w