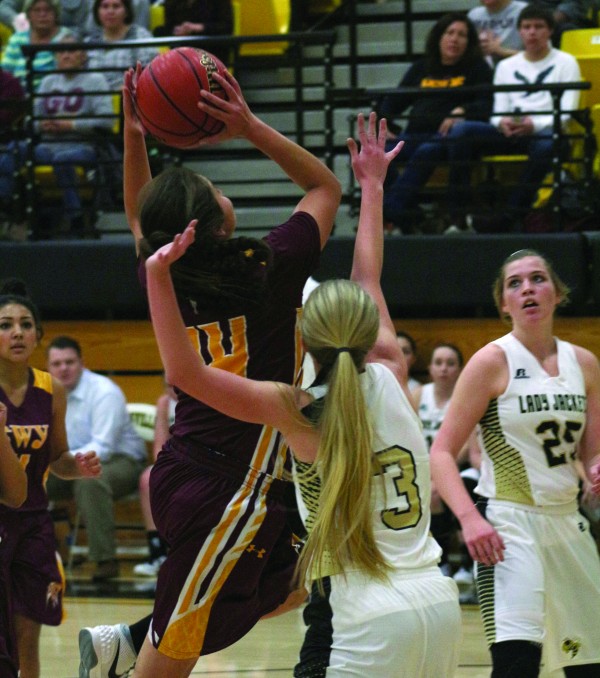 HAYESVILLE – In a game that was close until late in the third period, the Cherokee Lady Braves (5-2) got a key road win that may have big ramifications later on in the Smoky Mountain Conference.  Led by Pooh King with 18 points, the Lady Braves won 56-42 over Hayesville who fell to 0-4 on the season.

“This is always a tough place to play,” said Chris Mintz, Lady Braves head coach.  “We battled through some foul trouble and kept the game really slow in the first half.  We couldn’t really get our pace..but, we battled through it, and anytime you can win on the road in the conference you know you’re doing something good.”

He added, “I told our team that to win the conference you have to win most of them and to win one on the road is a feather in our cap.”

As Coach Mintz stated, the game did start slow.

Bree Stamper, Lady Braves senior forward, hit a three-point shot thirty seconds in to open the scoring in the game, but Hayesville didn’t get on the board until the 6:02 mark.  At the halfway point of the first period, Cherokee led 5-2, and they ended up leading 11-4 after the first eight minutes. 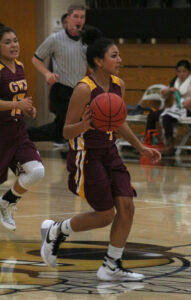 Carla Wolfe, Lady Braves freshman guard, brings the ball up the court during Tuesday’s game at Hayesville. She finished the night with 10 points.

Both teams traded baskets in the first minutes of the second period and Cherokee led 18-12 with 4:42 left before the half.  A minute later, King got a steal, drove the length of the court for a layup and was fouled.  She hit her foul shot for the traditional three-point play to put Cherokee up 21-14.

Hayesville’s Madison Douglas and Kimonta Lloyd both hit two free throws late in the period to bring the Lady Yellow Jackets to within three (21-18), but King nailed a three-point shot with 26 seconds left to give Cherokee a 24-18 lead at the half.

The teams traded baskets again for the first few minutes of the third period and Cherokee led 30-24 with just over four minutes left in the period.  Several moments later, Carla Wolfe, Lady Braves freshman guard, drilled a three-point shot to put Cherokee up by nine points (33-24).  She finished the game with 10 points.

Cherokee outscored Hayesville 10-9 for the remaining four minutes of the third period and led 43-33 going into the fourth.

The Lady Braves came out for the final period gunning and outscored Hayesville 6-2 in the first few minutes.  Wolfe added another three-pointer with 4:44 left in the game to put Cherokee up by 15 (52-37), and the Lady Braves would hold on for the 56-42 win.

To view or purchase photos from this game, visit: https://onefeather.smugmug.com/SPORTS/BASKETBALL/LADY-BRAVES-BASKETBALL-201516/At-Hayesville-December-15/i-THXWrpw