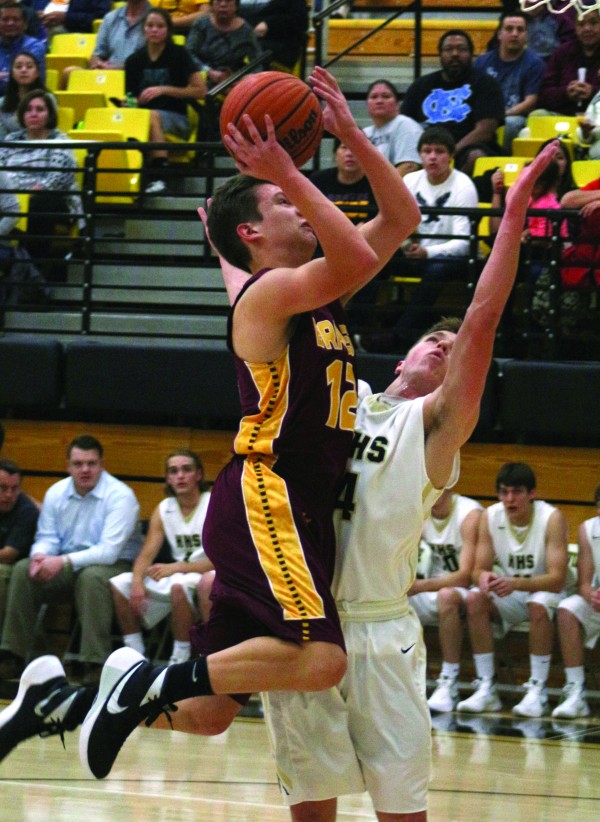 Steven Straughan (#12), Braves senior forward, goes for a shot over Hayesville’s Tyler Leek (#4) in a game at Hayesville on Tuesday, Dec. 15. Straughan, who fouled out in the second half, ended the game with 5 points and 1 rebound. (SCOTT MCKIE B.P./One Feather)

HAYESVILLE – The Cherokee Braves (5-2) had a tough road trip to Hayesville on Tuesday, Dec. 15.  Two Yellow Jackets had over 20 points including Braxton Cox (21) and Zachary Cottrell (28) as Hayesville remained undefeated (4-0) with a 92-68 win.

Cherokee was led by Justus Day with 13 points and Jason McMillan with 12.  Both Day and McMillan, along with Steven Straughan, fouled out in the second half.  Kennan Panther led Cherokee with 6 rebounds followed by McMillan 5, Holden Straughan 5 and Day 4.  Both McMillan and Day had two steals.

Willis Tullos, Braves head coach, didn’t make any excuses, “We were against a better basketball team tonight.  They were better than we were.  It’s just that simple.  We didn’t do what we needed to do and they did.”

The Braves started slowly in this game and Hayesville took an early 5-0 lead.  Cherokee got on the board as Steven Straughan got a steal and layup to make it 5-2 at the 6:01 mark of the first period.  Hayesville led 11-6 midway through the period, but Logan Teesateskie hit a three-point shot from the left side to make it 11-9.

Both teams traded baskets for the next minute, and then Hayesville knocked down three three-point shots in the last minute to take a 12-point (29-17) lead into the second period.

Cherokee came rolling back though and hit three three-point shots of their own at the start of the second to bring it to 34-28 with 4:24 left before the half.

To view or purchase photos from this game, visit: https://onefeather.smugmug.com/SPORTS/BASKETBALL/BRAVES-BASKETBALL-201516/At-Hayesville-December-15/