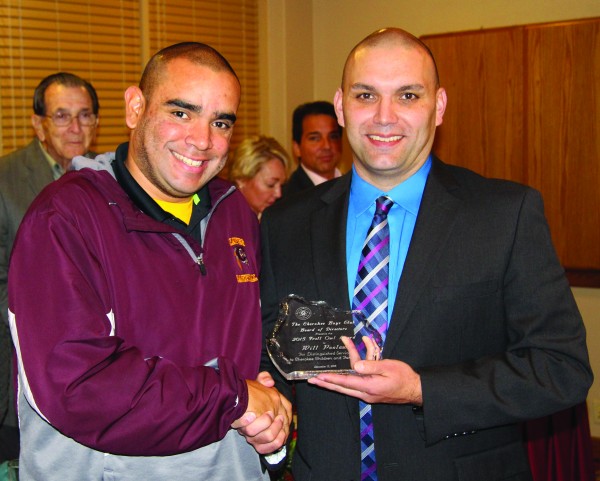 Known for his constant smile, incredible knowledge of sports, and a work ethic that rivals anyone on the Qualla Boundary, Will Poolaw is a fixture in the Cherokee community.  He was honored for his tireless commitment by being named the 2015 recipient of the Frell Owl Award at the 29th Annual Frell Owl Award Presentation held Tuesday, Dec. 15 at the Chestnut Tree Inn.

Poolaw is a constant at Cherokee Central Schools sporting events and serves as the manager for several sports including football and basketball.  In addition, he is an active member of the Qualla Boundary Special Olympics and competes at area competitions in several events.

“Will is a very special person,” said Henryetta Gloyne, Poolaw’s aunt, who read a statement from the family.  “We, as a family, have learned a great deal over the years from William.  He reminds us on a daily basis the true meaning of thoughtfulness and love.  He knows our likes, our dislikes, our teams, our team’s scores, team rosters and much more.  There is not a day that goes by that someone in the family does not receive a phone call or text asking how their day is…”

Vice Chief Richie Sneed commented, “You can tell someone that it’s better to give than to receive.  Unfortunately, until you take the plunge yourself and do it, you’ll never really experience that and Will, you’ve just been a tremendous example to all of us that indeed, it is true, that it is more blessed to give than to receive.”

“I think the thing that I appreciate the most about you is your passion.  You’re so passionate about the Braves.  You’re passionate about what you do.  You mean so much to us and this community, and I just want to say thank you for all that you do for our community and for our teams.”

Cherokee Central School Superintendent Scott Penland said of Poolaw, “I’ve been here three years, and I can honestly say he’s been an inspiration to me just watching him work with the youth.  He’s always there.  And, everything that’s been said about him is right…he’s there, he’s early, he stays late, always smiling and always excited.”