WINSTON – SALEM – The Robbinsville Black Knights (12-3) had the Plymouth Vikings (14-2) on the ropes in the final minutes of the NCHSAA State Championship at Wake Forest University on Saturday, Dec. 12.  After rallying back from a 20-point deficient late in the fourth quarter, a critical dropped punt by the Black Knights was recovered by the Vikings, effectively sealing the game for the 2015 North Carolina High School Athletic Association 1A State Champions Plymouth Vikings.

Several EBCI tribal members were instrumental in the Black Knights’ season including Paden Welch who was named Robbinsville’s Defensive MVP of the state championship game with 19 tackles.  Fellow tribal member Colby Hemphill won the Offensive MVP award.  Both athletes were selected to the All-SMC team.

A promising Black Knight drive stalled early after Robbinsville’s Lane Millsaps pounced on Plymouth with a 15-yard run.  However, the Black Knights’ opening drive stalled and Robbinsville was forced to punt and the Vikings took over on their own 34-yard line.  A few plays later, Plymouth’s Chad Dance ran 54 yards into the end zone for a touchdown and put the Vikings on top 7-0 at the 8:44 mark of the first quarter. 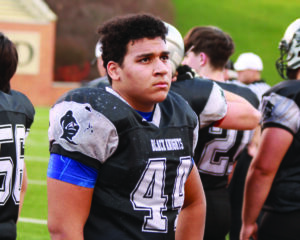 Robbinsville wasn’t able to find their rhythm and fumbled on their next drive at their own 36-yard line.  The Black Knight defense held the Vikings to a fourth-down and six when Plymouth’s Samyr Cooper connected to Taqan White for a 31-yard pass, putting the ball at the 1-yard line.  Plymouth’s Chris Kelly rushed for 1-yard to put the Vikings on top 14-0 at the 5:49 mark.

The Black Knights woes continued on their next drive when Plymouth’s Dion McDonald picked up a Colton Millsaps fumble and returned it 16-yards to put the Vikings on top 21-0 with 4:53 left in the first quarter.

Robbinsville finally found their footing on their fourth drive as the Black Knights Most Valuable Offensive Performer, Colby Hemphill (60 yards on 10 carries), capped off a 76-yard drive when he plowed ahead for a 3-yard touchdown run.  A two-point run by Hemphill brought the score to 21-8 with 1:41 left in the first quarter.

Neither team was able to score during the second quarter, but Robbinsville’s Chandler Jumper recovered a fumble at the 4-yard line to stop threatening Vikings drive and again on Plymouth’s next drive at the 3-yard line.   Plymouth took a 21-8 lead into halftime.

After a quiet third quarter, Plymouth’s Chris Kelly scored on a 6-yard rushing touchdown to put the Vikings ahead 28-8 with 1:25 in the third quarter.

After a series of stalled drives by both teams, the Black Knights took over on their own 20-yard line with 9:58 left in the ballgame.  Three minutes and 58 seconds later, Hemphill scored on a 2-yard run to breathe life back into the Robbinsville sideline and brought the score to 28-14 after a failed PAT.

The Vikings recovered the ensuing onside kick but Robbinsville held them to another three and out.  However a muffed punt by Robbinsville was recovered by Plymouth and the Vikings kneeled the ball to finish the game.

To view or purchase photos from this game, visit: https://onefeather.smugmug.com/SPORTS/FOOTBALL/Robbinsville-vs-Plymouth-State/